We all have our favorite movie characters and fancy the actors and actresses that play their role in the media franchise. Game of Thrones is no different. With medieval costumes, brilliant cinematography, and mesmerizing set dressing, the performers play their part flawlessly.

Game of Thrones draws you deep into its realm and sets your heart racing for more battles and action sequences. The girls in this film have a hypnotic quality of their own and are the reasons why the majority of us fantasize about them because of their outstanding beauty. Some fans vote for both the male and female favorites, but today we are going to focus on the top ten hottest women in Game of Thrones.

Prepare to be amazed by these stunning woman, who match both beauty and brains and have proven to be great warriors. 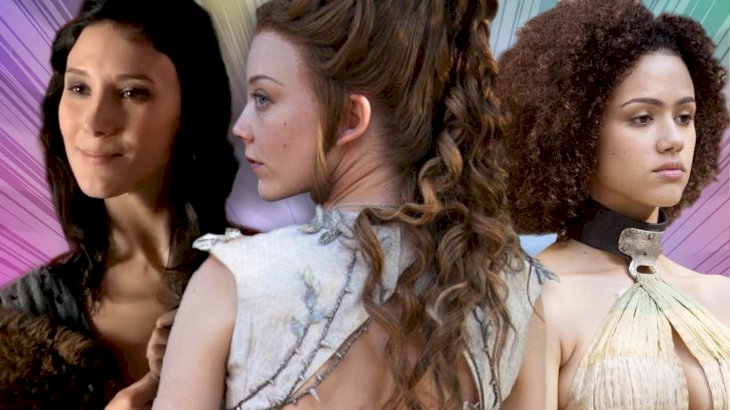 For the ultimate fan, there are memorabilia such as swords, armor, goblets, and mugs. Many out there love the series so much, that they collect all items relating to the show. Items range from the Dragon Queen to the Queen of the Seven Kingdoms. These warriors are blood-stained, mud, and sweat. Not very lady-like, but they are aggressive female warriors who show no fear. No matter their appearance in battle, they are the ladies that win our hearts, among other organs. So let us start the countdown for the gorgeous women. Get ready to enjoy the list!

Character Info: She is the exiled princess Daenerys Targaryen, or Dany, as she is also known. She is one of the last surviving members of House Targaryen, and the former rulers of Westeros. Dany is the only daughter of King Aerys II Targaryen, and she is married to Khal Drogo. She became the Khaleesi (Queen) of his tribe, the Dothraki.

Background info: Emilia Clarke is a 30-year-old English actress, born in London. She trained at the Drama Centre in London before taking on small roles in commercials, television, and in the 2010 Sci-fi movie, Triassic Attack. In 2011, she joined the Game of Thrones team and had since won an EWwy Award as the Best Supporting Actress in Drama for her work. Well done, Emilia!

#67 on The Most Beautiful Women in the World

#47 on Famous Women You'd Want to Have a Beer With

Character info: Margaery Tyrell is not only beautiful but smart and cunning as well. She was once part of a plan to overthrow the Iron Throne from King Joffrey. Her mission involved marrying Renly Baratheon, the brother of the late King Robert. Instead, she married Joffrey.

Background info: Natalie Dormer is 36-years-old, and was born in Reading, England. She is no stranger to historical fantasy series and has appeared as Anne Boleyn in "The Tudors" for two seasons, and as Victoria in the 2005 film, Casanova. Recently, Natalie had a role in the 2011 movie, Captain America: The First Avenger, and in Rush 2013. She appeared as Cressida in The Hunger Games: Mockingjay - Parts 1 and 2. Dormer studied at the Webber Douglas Academy of Dramatic Art in her native country of England before her joining the media mainstream.

Background info: Rose Leslie, is a 31-year-old actress, born in Aberdeen, Scotland. BAFTA Award-winning actress began her acting journey at the London Academy of Music and Dramatic Art. Appearing as Gwen Dawson in the popular British period drama, "Downton Abbey," she sure turned a few heads.

#2 on The Best Living Scottish Actresses

#6 on The Best Scottish Actresses of All Time

Character info: Cersei Lannister was the wife of King Robert Baratheon and the Queen of the Seven Kingdoms. She is also the twin sister of Jaime Lannister, who has fathered three children, including King Joffrey and King Tommen. If word gets out that her sons are not the genuine offspring of the Baratheon line, she stands a chance to lose everything.

Background info: Lena Headey is an English actress. She is 44 years old and was born in Hamilton, Bermuda. She has a long list of acting credits, including the Matt Damon film, The Brothers Grimm, and 2007 epic 300, where she played Queen Gorgo. Headey also portrayed the title character in the television series, "Terminator: The Sarah Connor Chronicles." Lena is one tough lady.

#85 on Famous Women You'd Want to Have a Beer With

#29 on Celebrities Who Should Be A-Listers

#15 on The Best Living English Actresses

Character info: Acquired by Khaleesi Daenerys Targaryen, Missandei is a slave and translator in Astopor. She is fluent in 19 languages. Wow, that is a lot of words.

Background info: Nathalie is 29-years-old and was born in Southend-on-Sea in England. Before "Game of Thrones," Nathalie was well known as an actress on British sope series "Hollyoaks," where she played Sasha Valentine. Beautiful and talented.

#32 on Beautiful Young Actresses Under 30

Character info: Sansa Stark is the eldest daughter of Eddard Stark. She was once betrothed to Joffrey Baratheon. When the Baratheon broke, Sansa became a prisoner at King's Landing, and a political pawn at the mercy of the Lannisters. Since then, she has learned that she is a powerful tool.

Background info: At the age of 22, Sophie Turner landed her first role. This Northampton, England-born artist was nominated for a Young Artist Award for her performance. Excellent for an actress starting out in her first role on Game of Thrones. She appeared in the BBC Two Television film, The Thirteenth Tale in 2013.

#31 on Celebrities Who Should Be A-Listers

#26 on Beautiful Young Actresses Under 30

Character info: This recurring character, Doreah, was a former prostitute, who worked as a servant to Daenerys Targaryen. Doreah was then tasked with educating Daenerys in the art of satisfying her husband sexually.

Background info: This 37-year-old Canadian-born actress, Roxanne McKee, hails from West Sussex. She was first discovered when she won a Television network talent contest, and the first prize was a role in the British soap opera, "Hollyoaks." Her additional roles including the drams "Lip Service," and the online series, "EastEnders: E20."

Character info: Eastern priestess Melisandre of Asshai is an adviser to Stannis Baratheon. She can see the future and predicts that Stannis will be the one to lead the people of Westeros to R'hllor. Her powerful hold on Stannis is frowned upon, and all do not welcome her sexual influences.

Background info: Born in Leiderdorp, Netherlands, this Dutch 41-year-old actress has earned five Golden Calf Awards at the Netherlands Film Festival. Carice van Houten has also won Best Actress in Undercover Kitty in 2001, The Happy Housewife in 2010, and Black Butterflies in 2011. Apart from her acting career, she released a pop-rock album called, See You on the Ice. This lady is full of surprises.

Character info: This red-haired stunner, Ros, worked as a prostitute in a brothel outside of Winterfell. Sadly, these sexual acts were her destined career before moving to King's Landing, where she worked at yet another brothel, owned by Littlefinger. Because she was so beautiful, she was the favorite of many, especially Grand Maester Pycelle.

Background info: This 33-year-old from St Albans in England has shown some excellent sex appeal in Game of Thrones. Before this, the English actress performed in neo-burlesque and cabaret shows. Esmé Bianco has also worked as a lingerie model in England, giving her the confidence to strut her stuff. She has also worked in film, appearing in the 2008 movie Chemical Wedding, and the 2010 film, The big I Am. Another talented young lady.

Character info: Talisa Maegyr was one of the unique characters, who was not present in the original books on which "Game of Thrones" was based. She is an important recurring character nonetheless. Talisa had healing abilities and worked as a healer on the battlefield of the War of the Five Kings. She later married Robb Stark, who was promised to a Frey.

Background info: This Spanish actress was born in Madrid. Oona Chaplin, a 31-year-old has acting flowing in her veins. She is the granddaughter of Charlie Chaplin, and great-granddaughter of the playwright, Eugene O'Neill. Wow, that is some talented blood. Her early work consisted of stage acting, which led her to the Royal Academy of Dramatic Art. Since then, Chaplin has appeared in television roles such as "The Hour," and the BBC series, "Sherlock." Having the name of a famous person is sure to be a bonus as well.

What beautiful, talented ladies these are! If you loved these beautiful action warriors of Game of Thrones, be sure to share with your friends and family. We all have our favorite movie stars and enjoy reading as much as we can about them. So keep updated for more of your scoop on who have the highest ranks in the media industry.