For those gamers who love 'Red Dead Redemption 2', we are going to be discussing those important details and a bit of background that will help you along the way in finding out all you can about Dutch Van Der Linde.

You already know the graphics are amazing and the storyline and interaction are worthy of non-stop action play. So, get your pen and paper ready and make some notes because this will enhance your gameplay and perhaps clear a few things up. Let's dive straight into it! 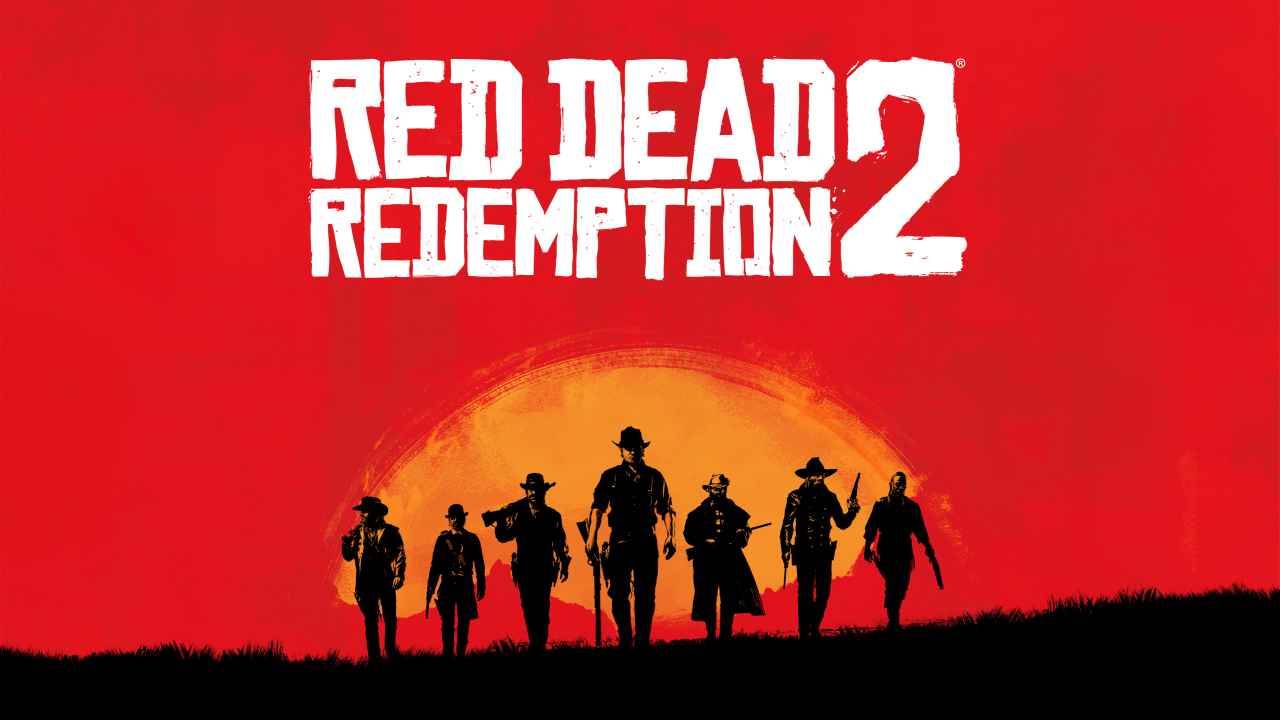 Let's begin with the history

What we know so far is that he was born in 1859 to an unnamed father who actually fought for the Union in the Civil war, and he died at the Battle of Gettysburg, and a woman named Greta was apparently by his side. Now, not much is known about his younger days, but he seemed to have developed a grudge against Southerners because of his father's death.

This might indicate why he dislikes being in San Denis and Lemoine, which you'll find out when you reach the later chapters of the game. Now, Dutch also mentions that he left his home when he was around 15-years-old because he rarely got along with his mother, whose death Dutch only found out several months from an uncle of his. 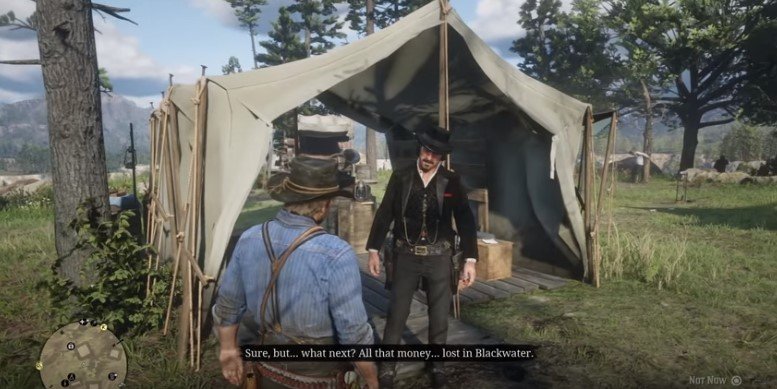 This troubled childhood actually causes Dutch to form his own gang after befriending Hosea Matthews. Matthews is a con artist who tried to rob Dutch and funny enough, Dutch had the same intentions. We know that both Dutch and Hosea are the founding members of the gang and then Arthur eventually joined them very early on.

There is actually a photograph of the three of them in their younger years, which can be found in Arthur's tent area. When you get a chance, you should go and check it out because you can see how much they have all aged, and how they've stuck together through the years, not to mention evolved. When it comes to mysteries, the infamous Blackwater ferry heist is something we need to delve into. 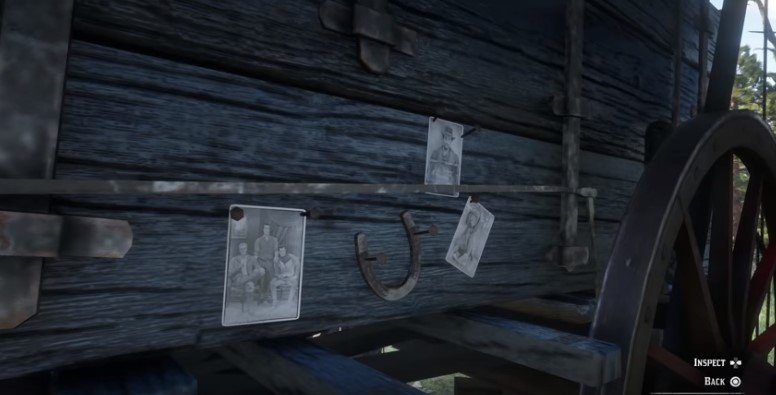 References and newspaper clippings throughout the game

This is referenced quite a lot throughout the game, but we don't have much detail on this actual heist itself, so the Van Der Linde gang led by Dutch, attempted one last big score at Blackwater. However, it ended in disaster and forced the gang to flee into the Blizzard Lee mountains of Amerarino to escape the heat.

Now, the specifications of this heist are kept very vague, but it is known that Dutch ended up killing a defenseless young woman named Heidi McCourt. The events of Blackwater heist shook Hosea's faith in Dutch although he admits a bit later on in the story that their mission had been dead for a long time before this. 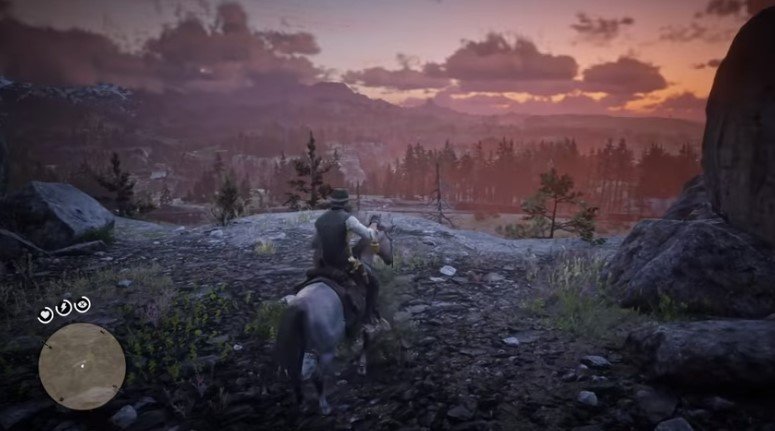 There isn't a lot of information known on Heidi McCourt. In fact, she's never seen during 'Red Dead Redemption' even though she's mentioned numerous times throughout the game. Now, after Chapter three, you can actually find out more information regarding the Blackwater heist if you visit Micah's camp which is North of Strawberry.

There you'll find a newspaper scrap that says: "May 1899 outlaw gang wanted over heist. Pinkertons increase search". It goes on to say that there is a gang of criminals believed to be under the outlaw of Dutch Van Der Linde, who escaped with approximately a hundred and fifty thousand dollars after a bloody gunfight with Pinkerton agents in Blackwater the day before. 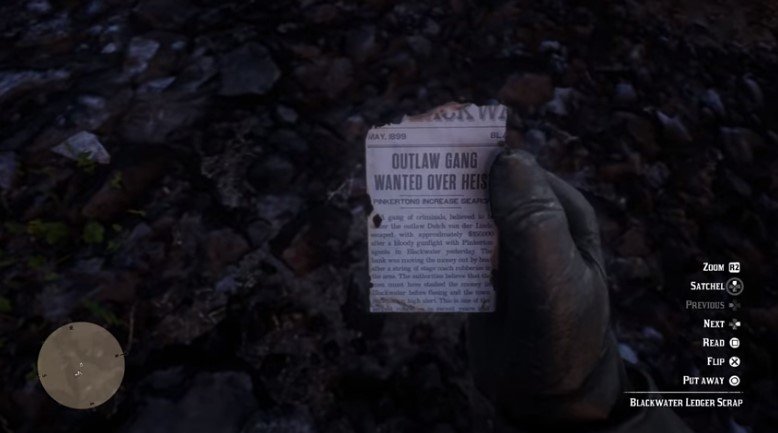 The bank moved the money out by boat after a string of stagecoach robberies in the area. Authorities believe that the men must have stashed the cash in Blackwater before fleeing, and the town remains on high alert. This is one of the largest robberies in recent years, and that's basically where it cuts off, and you can't read the rest.

So, back in 1899, 150 dollars is undoubtedly the equivalent of multi-millions of dollars today. This would make it an insane robbery, and this is why they are on the "Wanted" list. They didn't get to keep that money though and stashed it away. Now, at that very same location, you can also see a "Wanted" poster for Dutch as well. 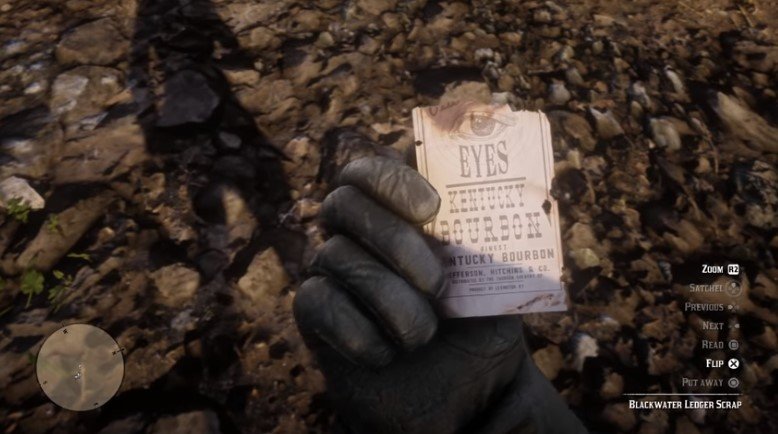 His award was apparently 1,000 dollars and is wanted dead or alive for robbery and murder. So having a 1,000 dollar bounty on his head is actually one of the highest bounties you can achieve in the game for a single person. If you read the very first newspaper you can acquire, and it may be The Saint Dennis Times N° 43, you can actually figure out more details on that Blackwater heist. It says: 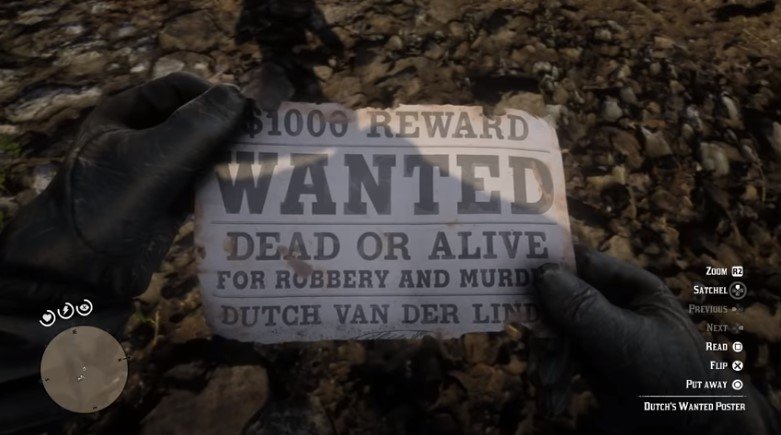 It goes on to say:

"After a bloody seizure of a large quantity of banknotes being shipped by boat, Pinkerton Agency officials have restricted access to the town of Blackwater, while a massive manhunt is underway. Officials issued bounties on the head of Dutch Van Der Linde and his gang, commonly known as Duchess boys. Banks look the shipping assets via boat as a more reliable means of transportation. The deadly attack resulted in the loss of a hundred and fifty thousand dollars, the largest robberty in the region in recent years. Authorities believe that the men may have stashed the money in Blackwater before fleeing. Reports indicate that many are searching high and low for stash up ending public spaces and neighboring gardens."

So, we get more details on ultimately what happened in that situation. Now, throughout the game, we see our two main characters John and Arthur have entirely different views on Dutch, based on their own personal experiences with him.

So, since Arthur was relatively young when he met Dutch, thought that he had changed and even held out hope to his last breath that Dutch was still a good guy and was going to do the right thing. John, however, had a much different opinion and thought that Dutch was always this way and that his mask eventually slipped. 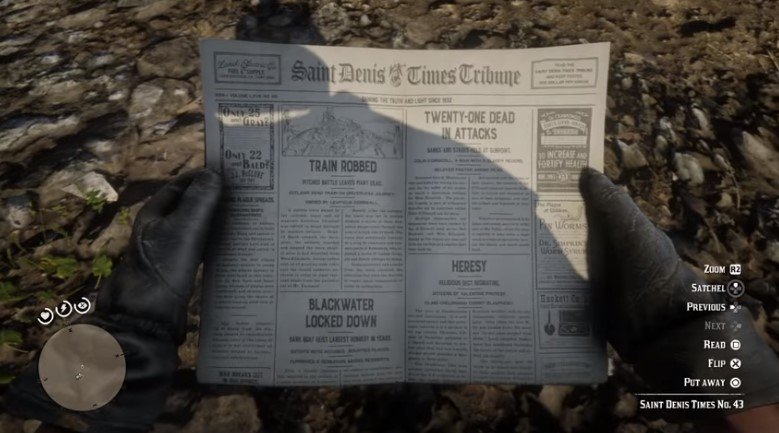 All the pressure with running from the law and continuously moving cause him to be this way, whereas Arthur thought something snapped inside Dutch to make him change. It's great to see the varying views from these characters. After chapter six, we don't actually see Dutch until the very end of epilogue two, although he can be read about in one of the newspaper reports.

You can check that out in the "Notorious Bad Man Alive" article. So this report confirms that he is still alive, and then, of course, you can find him the last mission of the game, "American Venom" at Micah Bell's hideout at the top of Mount Hagen.

A lot of people are wondering why Dutch is there and did he perhaps team up with Micah to eventually go back and retrieve the money, because they didn't seem to have the best relationship, even in the end of chapter six where Dutch walks away from Micah, showing us that he had no loyalty. 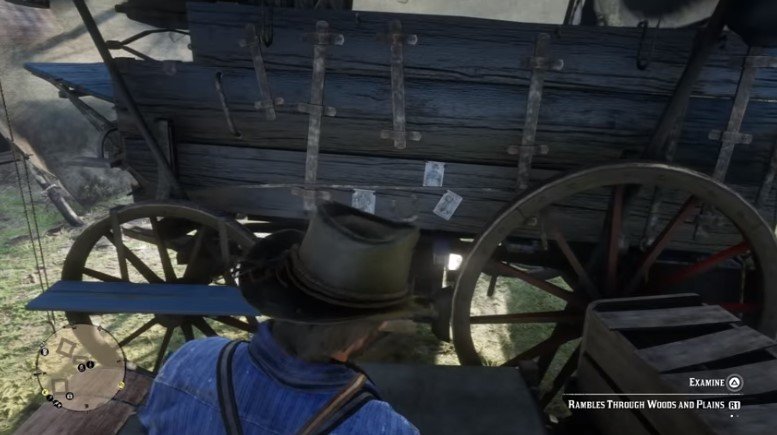 The strange and bitter end

In the end, Dutch was at a loss for words, possibly because he realized working with Micah was a bad choice, but we end up seeing him save both John and Sadie's life by shooting Micah, then mysteriously walks away. It does seem rather strange because he doesn't respond to John's "thank you" or even go back for the money.

In regards to the money issue, Dutch does not even bother with the stash; he just lets John take the remainder which is probably fifteen or twenty thousand dollars. It does not make sense, and we clearly know that he's a big part of the storyline in the first 'Red Dead Redemption' game, but where does he go in the end? He certainly didn't just wander off into the sunset.

There is about a four-year gap between the end of epilogue two which is in 1907, and then 1911 when RDD takes place. So, the question is: "Where does Dutch go for those four years?" If we had to take a wild guess, we'd have to say he could have been taking a break or laying low, but are not sure.

Some people say he may have even gone back to Blackwater, but we find this highly unlikely. He could have also visited his mother's grave. We mentioned earlier that her name was Greta, and you can actually find her grave in Blackwater, and her tombstone is a bit hard to read, but it says: "Greta Van Der Linde, loving mother to her son, Dutch".

We think the dates are 1835 to 1881, meaning she would have died about 18 years before the start of 'Red Dead Redemption 2' and then if you look a little closer, there's a quote that says: "There was grace in her steps. Love in every gesture..."

It does fade out and makes it hard to read, but that's basically what it says. Now, we aren't sure if you've figured out where they hid the money, but a good guess would be that this is actually where they stashed the loot. If you remember what the newspaper article said about them digging up gardens and public spaces, graveyards would be included. 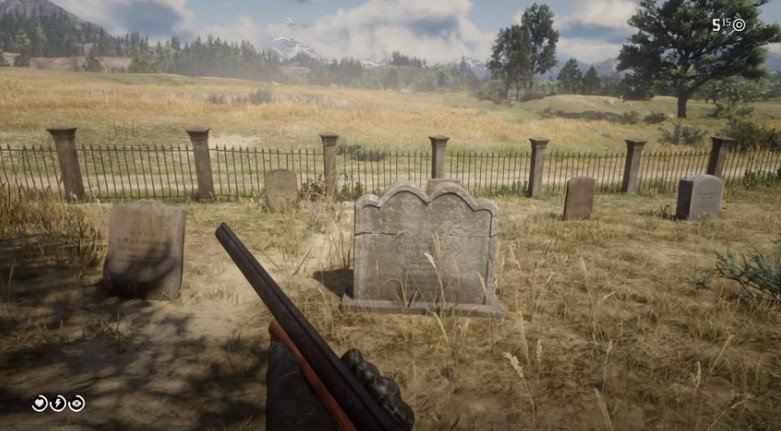 To end of, Molly O'Shea seems to be Duchess's romantic love interest, but throughout the game, you hear a character that is commonly mentioned, named Annabelle. There's no pictures or last name or hints as to who she is, and you don't even see her in the game. She may have been a member or associate of the Van Der Linde gang and had a very close relationship with Dutch.

Now, at some point prior to our started game in 1899, Dutch killed the brother of his one-time associate, Colm O'Driscoll, who in return, took Annabelle's life. It's her death that started the long-standing feud that we see between the O'Driscolls and the Van Der Linde gang throughout the game, and Dutch clearly mentioned several times throughout the game that he had strong feelings for Annabelle.

So, was her death one of the reasons for the unraveling of his character? It may have been a small part of the lore of the game, but it had a significant impact on what Dutch does and how the rest of the events unfold.

He certainly is one of the most interesting characters in the 'Red Dead Redemption' series. Did you know any of his histories? Are there other facts you may have come across during your gameplay? Feel free to tell us in the comments section below and remember to share this with all your RDD loving friends and family. Keep up-to-date with us for more exciting news and gamer tips.