Maidens fighting in wars, kings, queens, love, adventure, and drama, these are a couple of the things you get to see in the exciting and addictive show 'Vikings.' But have you ever wondered how the private lives of the cast are?

And even more importantly, who are these good-looking and hot actors dating? Don't worry! We got you covered with today's article as we will be unveiling the real-life couples of our top favorite actors of this fantastic TV show. You might be surprised to learn some of them are still single! Let's take a look!

He is such a hottie! But guess what? Good news for the ladies as the Australian model and actor is totally single. We know it is hard to believe, but he is! Travis was even labeled as one of the hottest bachelors by People Magazine in 2002, but he is just getting better as time passes, just like good wine.

It is true Fimmel has been associated with several co-stars, but the flings did not last long with any of them to have serious relationships. The most recent link was with Paula Patton, his colleague in 'Warcraft: The Beginning,' since their on-screen chemistry was undeniable. But it was recently known Paula has a boyfriend, so there's nothing between the two. Thank goodness! 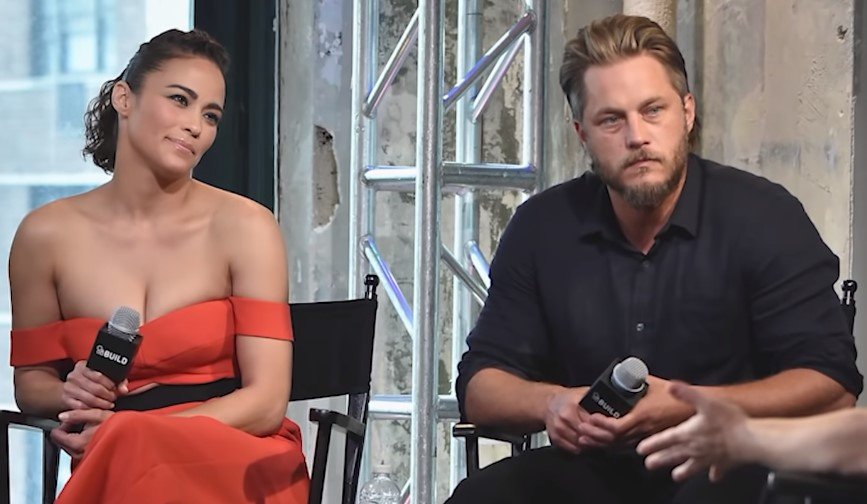 Continuing with the hotties of the show, we get to the Canadian actor whose charisma and attractive appearance has won the hearts of many women, and his dating record is the best confirmation of that. Back in 2008, when he was only 16, he dated his co-star AnnaSophia Robb, and their relationship lasted three years.

Others to add to his list are actress Leven Rambin whom he met on the set of 'Hunger Games' and model Nicole Pedra, but he now seems to be very happy with model, dancer, and actress Kristy Dawn Dinsmore, and their pictures on Instagram confirm that.

The carefree and wild hippie of the characters captured the hearts of viewers, and it is as if Helga was written for Maude. And perhaps, it was, as she is the daughter of Vikings' writer and producer Michael Hirst. After her time on the TV show, Maude has focused on physical and mental health by being a yoga and meditation instructor.

The sad part is that she is not planning to embark on any new production, and is concentrating on her yoga career. As for her love life, little is known about it. She has been spotted on many occasions with British singer Bryn Christopher, but it is unclear if they're a couple or just friends.

Perhaps, you didn't know this, but Gustaf comes from a pretty famous family. His father is actor Stellan Skarsgård who is known for 'Pirates of the Caribbean' and 'The Avengers,' and his brothers, Alexander and Bill, are also actors. But let's focus on Gustaf.

He was in a long-term relationship with actress Hanna Alström from 1999 to 2005. He hadn't had any other romance since Hannah, but that changed in 2019. He has been recently spotted with model Caroline Sjöström, and they have very romantic pictures together. We're not sure if it is serious, but it seems like a good start.

The Canadian actress with Ukranian roots doesn't let the world know much about her couples. In 2015, she was spotted with Sofia Vergara's ex, Nick Loeb, but apparently, their thing didn't last long. Katheryn might be an intimidating woman for men as she has a black belt in Taekwondo and a bodyguard license.

That explains how she can easily interpret Lagertha. She also has a good relationship with Alex Høgh Andersen, but given the 16-year difference in age, we're pretty sure they're only friends. As far as we know, Katheryn is still single, just as Travis, so who knows? Maybe their on-screen chemistry will turn into something else in real life.

The first acting job for this Danish actor was in 'Vikings,' so he was pretty unknown before the show. Apart from his friendship with Winnick, he doesn't have any recent romance. Maybe, he doesn't want any girl to distract him while he's forging his career as an actor.

But even without a girlfriend, Alex keeps himself quite busy. When he is not filming the TV series, he's into photography, dancing, singing, fencing, sports, and even stunts. Not bad at all! We're pretty sure this is just the beginning for him in the industry, and then, he will have time to find love.

George's figure was a defining character in 'Vikings' history, but he was alone until his last days. For George, the story is entirely different as he dated an actress from the show, Elinor Crawley. Love sparked on set but the flame sadly extinguished last year when they broke up.

That doesn't mean Blagden is currently single. He's now dating another colleague whom he met on stage, Laura Pitt-Pulford, and they seem to be crazy over each other according to their Instagram pictures. George cannot ask for more. He has a girl, a dog, and a rising career. Keep it up, boy!

We love Aslaug as much as we love Lagertha, and who wouldn't? They are both talented and gorgeous. Alyssa's career started in 2006, but one of her major roles has been in 'Vikings.' Before the show, she tied the knot with Director Laurence Shanet, but the marriage ended only a year after when she started portraying Aslaug.

But the Australian hottie is not alone. Alyssa has been dating photographer Benjamin Walsh. Although there isn't any official confirmation, you just have to look at their photos on social networks to get the picture. We hope this new relationship is a happy and long-lasting one.

This ruthless warrior was able to find love on the TV show, but how about for Clive offscreen? It is even better as he met his soulmate in 2005, his now-wife, Francesca. When he felt it was time to propose, he dressed up as Elvis Presley, Francesca's favorite singer, and sang her a song before popping the question. How romantic!

The lovebirds tied the knot in 2007, so they have been happily married for 11 years and counting, as you can judge from his Instagram's pictures and posts for Francesca. Also, they also have three beautiful children, two sons, and a daughter. We're so happy for Clive's successful life, both personal and professional.

Were you surprised at the romantic lives of our favorite 'Vikings' characters? We truly enjoyed learning about Clive's love history, and for those who are still single, we bet love will knock at their doors soon. If you enjoyed this article, share it with some friends, and don't forget to tell us your opinion in the comment section. Until next time!