What Happened To Kurt Angle: Sad Real Life Story Of The Ultimate Wrestler

Kurt Steven Angle was born on December 9, 1968. He is an American actor and a retired professional wrestler signed to WWE. While Kurt Angle was at the Clarion University of Pennsylvania, he won lots of accolades, including being a two-time National Collegiate Athletic Association (NCAA) Division.

Kurt Angle may be a great wrestler with Olympic gold and lots of time spent in WWE. However, this doesn't mean it has been easy for the former wrestler. He has struggled with more than a fair share of calamities. Here's the catastrophic life story of Kurt Angle.

HE LOST HIS FATHER

All of his achievements have had to do with his father who passed on decades ago as a result of a fatal freak accident. David Angle was a crane operator who was in attendance of all of Kurt's wrestling matches and football games. When Kurt Angle was 16, in 1985 his father, David Angle fell out of a crane and landed on his head, and even with a cracked skull, he walked himself to the hospital. Though he later slipped into a coma and died two days later.

Kurt Angle reaction to this grievous occurrence is doing what he knows to do best, being the best at athletics. He had an impressive football performance the same week of his father's demise. His father's death might be the catalyst for Kurt Angle, being the man that he is. He said in his autobiography,

"I grew up and over and my fears the day my father died. I vowed right there and then to become a champion, to do whatever it took."

THE DEATH OF DAVE SCHULTZ

Kurt Angle and Dave Schultz were members of Team Foxcatcher, a wrestling squad funded by philanthropist, John Du Pont. Dave Schultz won Olympic gold in 1984 and helped Kurt Angle train for the 96 games, but he did not get to see his trainee's victory. Unfortunately, John Du Pont had severe mental issues, and according to the court's testimony got worse as the team prepared for the Olympics. He threatened several wrestlers and kicked some off the team. 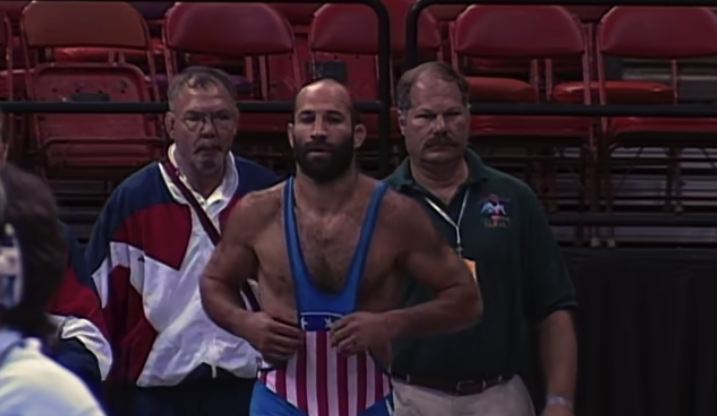 On January 26, 1997, John Du Pont shot Dave Schultz three times. Because of this crime, he was sentenced to prison and died in prison in 2010. A frustrated Kurt Angle ended up being the only person on his team at the Olympics, and he tried his best to honour his trainer's memory.

HE BROKE HIS NECK

Kurt Angle always bragged about winning a gold medal with a "broken freakin neck". He quickly made it a catchphrase as he said it frequently; this diverts attention to how severe the incidence was and how it steered him down the long path of injury and addiction. Kurt Angle landed hard on his head at the Olympic trials, cracking two vertebrae and pulling his neck muscles. Despite having injuries that should have knocked him out of the game, he forged on.

When he went in for his MIR the next day, his doctor ordered him to rest and heal for at least six months. This would have taken him out of the Olympics, but somehow, Kurt Angle found a doctor who was either "smart enough or stupid enough to let him wrestle." Well, Kurt Angle followed this new doctor's plans to the Olympics gold.

HIS ADDICTION TO DRUGS AND DUIS

Kurt Angle is not the only wrestler who has had to battle with drug addiction. Well, his struggle has explicitly been different. He suffered a lot of injuries as a wrestler and ended up developing an addiction to painkillers of all kinds. This got very bad as he even went as far as going from doctor to doctor—as much as ten at times— to get a different prescription so he can get as many painkillers as needed.

The gold medalist told the Pittsburgh Tribune-Review he was still clean in 2006. Nevertheless, that didn't last because in 2014 the pro wrestler admitted in a CBS Interview to a seven-year-long battle of a potentially lethal cocktail of morphine, Xanax, and alcohol. This addiction later bagged him four DUI arrests. One occurred in August 2013 when Kurt Angle was arrested in Texas for reckless driving. After many arrests, this Olympian decided he was going to rehab. He said:

"In light of recent events, I will immediately be entering a rehabilitation centre. I realize that this is a pivotal time in my life and I ask for your understanding as well your prayers and continued support."

One could say Kurt's triumphs were as much as his tragedies. As of 2003, the Olympic champion had had enough bad news to go round for a lifetime, but there was more on the way for him. Kurt Angle lost his sister Le' Anne to heroin addiction. He said he handled the death of his sister roughly, just like he did his father's demise. He wrestled in a scheduled one hour match with Brock Lesnar a day after Le'Anne's passing. Although it was a good match, Kurt Angle realized it wasn't the best way to grief. He couldn't talk about her death publicly for a long time until a 2014 YouTube video journal.

Since 2014, Kurt Angle had managed to stay away from drama. Unfortunately, he had to deal with one of the saddest things when he realized one of his family members was a killer. It happened that Kurt Angle's brother, David Angle, called 911 on September 28, 2015, to say his wife, Donna was unconscious. According to him, they both had a domestic argument that led to her death. Shortly after that, David Angle was arrested and sentenced for homicide. In June 2016, David Angle pledged to be guilty of voluntary manslaughter and was sentenced to a maximum of 10 years in prison. Although Kurt Angle wasn't involved in this incident, any death in the family is hard to deal with.

Read More: Why Tom Hiddleston Is The Perfect Fit For The Next James Bond

The famous wrestler has sure had a tumultuous life, but he managed to stay on top through it all. When did you first hear of Kurt Angle? Did you have a clue of his dark history? Let us know your answers in the comment section and share this article with a friend today.