6 Things That True Fans Have Realized About The Spider-Man: Far From Home Trailer

Marvel just dropped the new trailer for ‘Spider-Man: Far From Home’, which is set just after ‘Avengers: Endgame’, and how Peter deals with the loss of Iron Man. Additionally, it looks like our spider hero has to continue to save the world with an ally called Mysterio, played by Jake Gyllenhaal. However, some fans might have missed some interesting details in the trailer. Let’s discover these clues!

‘Avengers: Endgame’ was tragically beautiful, as it wrapped up the Infinity Saga perfectly. However, losing Tony Stark is a devastating loss for the Marvel Universe. It looks like ‘Spider-Man: Far From Home’ is going to honor Iron Man in several ways, and Peter was seen rocking the same glasses that Tony Stark has been using for several films now.

We will have to wait and see what he does and how he got them, but Peter seemed pretty surprised by the shades in the trailer. That could be because they are full of functions that Tony added such as nanotechnology. Iron Man donned the frames in ‘Avengers: Infinity War’ right after Cull Obsidian and Ebony Maw landed in New York City.

He was talking to his assistant F.R.I.D.A.Y. Maybe Peter will need her in this film. It might help connect with Stark Industries and receive help during his adventures in Europe.

Marvel has been known to arrange the footage added to trailers to build up the hype of the film. For ‘Infinity War’, they added a scene with Hulk in Wakanda, but Hulk did not come out after the beginning of the movie. Other scenes in trailers end up being cut from the film completely like Black Widow’s shooting practice for ‘Endgame’.

This means that the latest ‘Far From Home’ might contain things that will not appear in the final cut of the movie. Additionally, there seems to have been a Spider-Man suit switch. In the teaser trailer, Peter is with Aunt May during a charity event for the Salvation Army, and he is wearing the classic red suit. However, the official trailer features him in the new, improved, more Iron Man-inspired costume.

It could mean that the scene was reshot or they replaced it with some cool CGI. However, why would they do that? The Iron-Spider suit is much more important to Peter now that his mentor is gone. Another reason could be that Marvel did not want to show him alive and well before since he was apparently dead after the Decimation.

Most fans remember the original movie version of Spider-Man, played by Tobey Mcguire, and directed by Sam Raimi. However, Crusher Hogan was not part of that franchise. Instead, it featured Randy Savage as Bone Saw McGraw because Savage would never have any relation to the last name “Hogan”. There was simply too much bad blood between him and Hulk Hogan.

However, in the comics, when Peter Parker needed to get famous, he fought a wrestler called Crusher Hogan. The new trailer actually has a reference to the fighter with a poster behind Happy. It also included his celebrated offer, “$100 to the man who can stay in the ring three minutes with Crusher Hogan.” Although the full origin of Tom Holland’s Spider-Man was never revealed, he might have actually faced the wrestler. 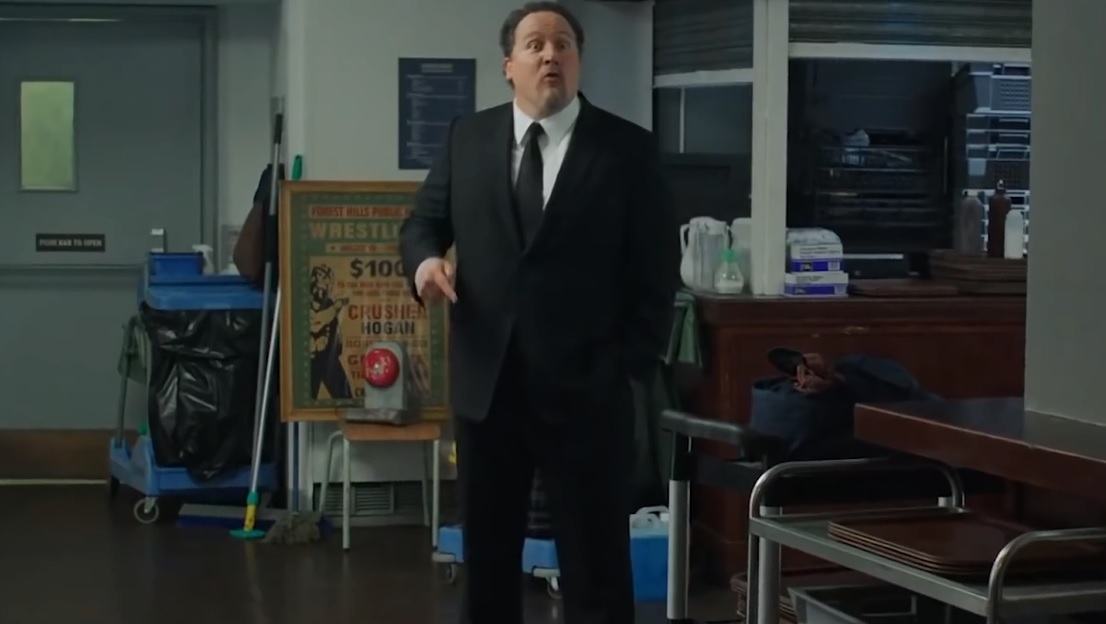 In 2018, it was revealed that Turkish actor Numan Acar had been cast as “Dimitri” in the upcoming film. Some reports wondered if the actor would play Dimitri Smerdyakov, the half-brother of Craven the Hunter, aka Chameleon. He is one of the oldest Spider-Man enemies after appearing in the first issue of ‘Amazing Spider-Man’.

The character does not explicitly appear in the trailer, but he could be hiding. After all, Chameleon is like Mystique from ‘X-Men’, who can change into any form. At the beginning of the trailer, Spider-Man captured a bunch of men in a fancy place, and the one dangling from the chandelier was wearing a leopard print suit. This could be a reference to Craven, who loved fur. 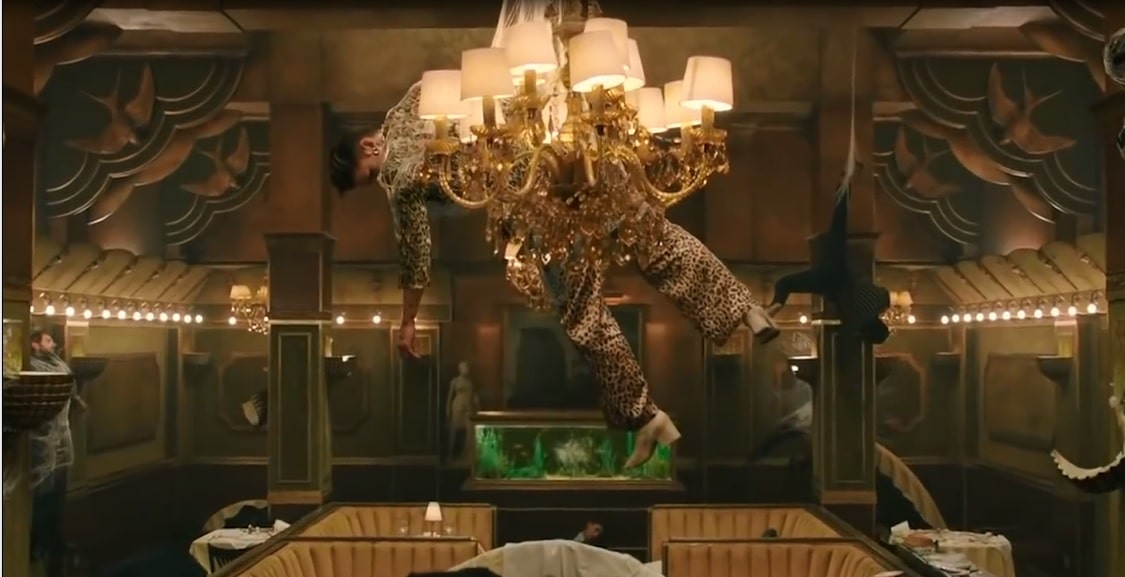 Otherwise, he could be basically anyone else in the trailer. Mysterio is not exactly a good guy; so, he might be planning something. Perhaps, Nick Fury or Maria Hill are not really themselves. He could even be MJ.

We hope that the movie shows a bit more about life after the reverse of the Decimation. People lost five years of their lives, while the rest of the world tried to move on. However, the trailer has revealed that this world is all about loving Iron Man. There are many tributes to Tony Stark all over.

Peter is seen looking at a mural, but there are also pictures of Iron Man in classrooms and more. Tony was a big part of Peter Parker’s life and his Spider-Man origin, and he has to adapt to a world without him while also trying to finish high school after being away for five years.

By the end of the trailer, Peter was seen with a colorful, Spider-Man inspired hologram on his arm. Peter was surprised by the gadget, and he looked toward someone else in amazement. The editing of the teaser makes it seem like he was looking at Happy, but there is no telling where they are. They might be aboard Happy’s cool jet. 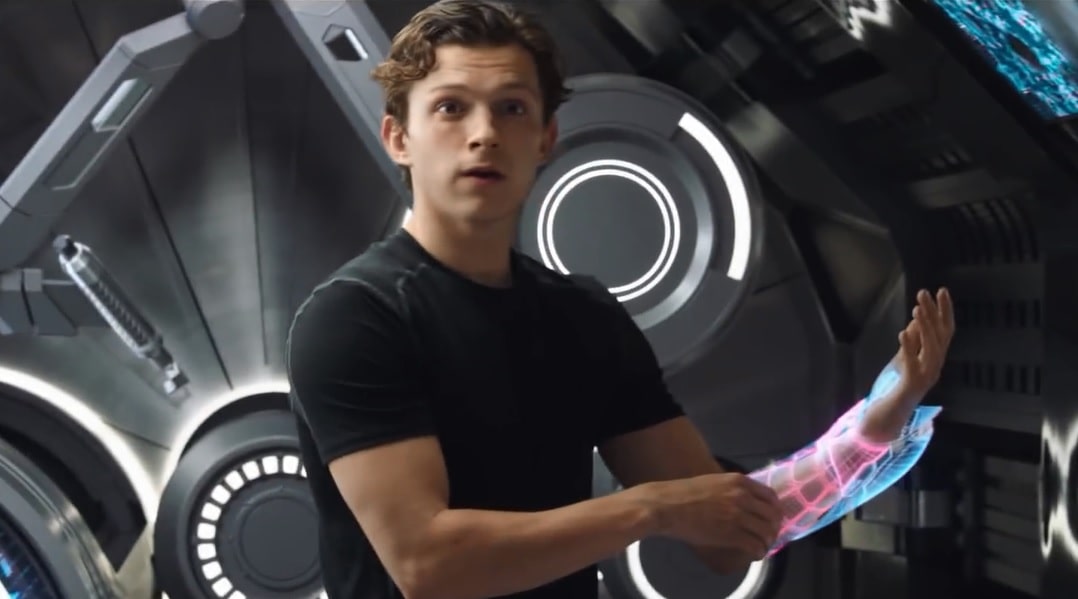 It is very likely that Tony Stark might have left something for Peter Parker. It could also be something related to Quentin Beck/Mysterio, who has often used technology and illusions to “recreate” superpowers. Either way, Peter was very surprised by it, and we will have to wait and see if that is good or bad.

The heartbreak of ‘Avengers: Endgame’ makes it hard to continue watching anything in the MCU. But, we all need to move on at some point. Let us know what you think of the new trailer. If you liked this article, share it with your friends who cried during the last film. See you next time!