The End Of Godzilla: Would It Remain On Human Side For Long?

It’s been about five years since Godzilla last appeared on the big screen, and Legendary Pictures has brought the ‘King of the Monsters’ back. It’s also the third movie in the studios’ MonsterVerse franchise, and it was the biggest one yet. However, they are building up toward up towards more because a sequel is expected for 2020 that will expand on the ending. So, let’s go into detail about it!

HE IS THE GOOD GUY FOR NOW

As expected, the film ends with an amazing fight between Godzilla and Ghidorah that leaves Boston shattered. Godzilla seems to be on humanity side’s as he destroyed the other Titan by eating one of its heads and spitting some of it out. Dr. Stanton even remarked, "Thank God he's on our side," but Dr. Ilene Chen commented,

It’s clearly meant to signify that while Godzilla helped return the world to a somewhat normal state – as normal as it can be considering these Titans exist – things could go south at any moment. Daily life is going to change for everyone.

WHAT ABOUT MONSTER ZERO?

Godzilla managed to chew one of Ghidorah’s heads off before the Oxygen Destroyer was released, which put the King of Monsters to sleep. But, Ghidorah was immune to the Destroyer because he had been on Earth for millennia, and he can also rebuild lost heads. In the post-credits scene, it’s revealed that a fisherman picked the severed head and gave to Alan Jonah and his terrorists.

Jonah originally wanted to wake up the Titan one at a time to restore balance, but Ghidorah woke them all at once. It’s hard to say what he plans to do with his head, but he could sell the DNA or even try to resurrect the Titan under his command. However, he might not be able to bring Monster Zero back.

Most Godzilla films also feature Mothra as a nice being that wants to live with humans in peace, and the Queen of the Monsters was exactly the same in this installment. She defeated Rodan and sacrificed herself to Ghidorah to help Godzilla. Her essence landed on him and gave him the power necessary to face against the other creature.

But, that is not the end of Mothra. Some images from the ending credits could mean that the Queen is regrouping and could return once more. Furthermore, she might not be alone. The Chen twins are also part of the Monarch, a line that follows the Titans, and the fact that there are two of them seems to suggest the appearance of Shobijin, the twin fairies who worship the Queen.

Kong was the focus on the second film in the MonsterVerse, but this movie also referenced the Skull Island king several times. He will appear once more next year on ‘Godzilla vs. Kong’, but it’s hard to explain why there was nothing new about Kong, even after Ghidorah woke up all the Titans. Some might say that he is on a remote island and cannot cross the sea around it.

But, the news images from the end suggest that the Titans are going to Skull Island, and he might have been just as powerful as Mothra and Godzilla who resisted the call of Ghidorah. That makes him equally as strong as Godzilla.

THE EARTH IS HOLLOW

Dr. Stanton has a theory that the earth is hollow because Godzilla can move quickly underwater, and so, he uses tunnels underground that humanity has not uncovered. No one believes until a team of Monarch follows the monster into the depths and discovered that there are tunnels that no technology could detect. 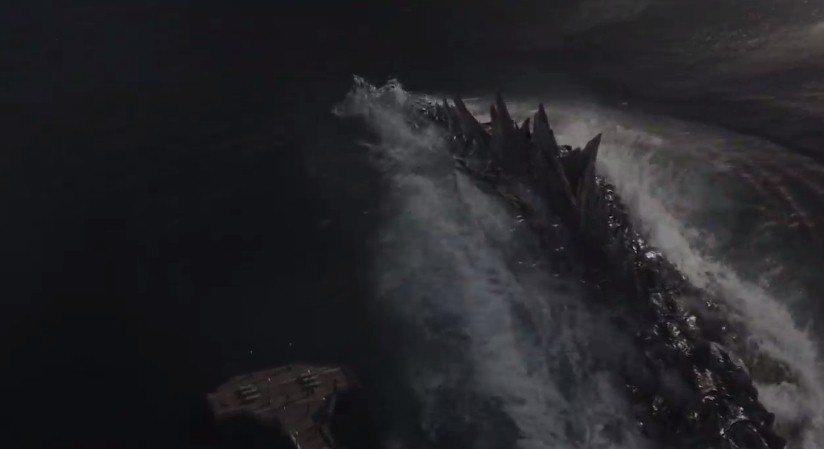 But, they are not just tunnels, but an underwater city that is older than what the ancient Egyptians built. News clippings from the ending show that the information was shared to the world, and therefore, some societies, the “Hollow Earth Humans”, lived with the Titans harmoniously.

Unfortunately, the city was destroyed by Dr. Serizawa’s nuclear charge that revived Godzilla. On the other hand, if there was a city of people worshipping “The First’s Gods”, there might be many more around the world.

While the film is all about the destruction of many cities due to the Titans, it also focuses on the matter of human emotion. That part centers on the Russell family, which suffered when Godzilla attacked San Francisco in 2014. Emma and Mark’s son died, and their marriage ended due to Mark’s drinking. Madison stayed with her mother, but she saw as Emma became insane thinking that Titans could cull out some humans.

Luckily, her mother manages to redeem herself during the confrontation with Ghidorah. Sadly, when things are done only Mark and Madison remain, and they helped Godzilla become the alpha. They cannot kill all the Titans as Mark wanted, and Madison has a bond with Mothra and Godzilla. Their future is still up in the air, since Millie Bobby Brown is returning for ‘Godzilla vs. Kong’, they will definitely stay together.

Read more: Little Details We All Might Have Missed In “Brightburn”

While this film focuses on Godzilla and the big players in his world, Ghidorah, Mothra, and Rodan, there are other Titans. Ghidorah woke up all the Titans in the world, and only a few were shown in the movie. However, some glimpses revealed that some of these monsters were not in the original Godzilla franchise.

Two creatures - the giant spider Scylla and the mammoth Behemoth - are the perfect examples. Introducing more monsters is always great, and the Monarch has a lot of research to do now that they discovered alien Titans and the underwater cities. The world in the Monsterverse is already huge, but it can always grow.

It seems like people will get to know more about the deep world of Titans in the future. Let us know what you thought of the film. If you liked this article, share it with your friends who love this kind of action-packed, special-effects films. See you next time!