Ricky and David Nelson, the sons of ‘50s TV stars Harriet and Ozzy Nelson, were introduced to the entertainment industry at a very young age. They found success in their professional lives but faced several struggles in their personal lives that, eventually, ended in tragedy for one of them. 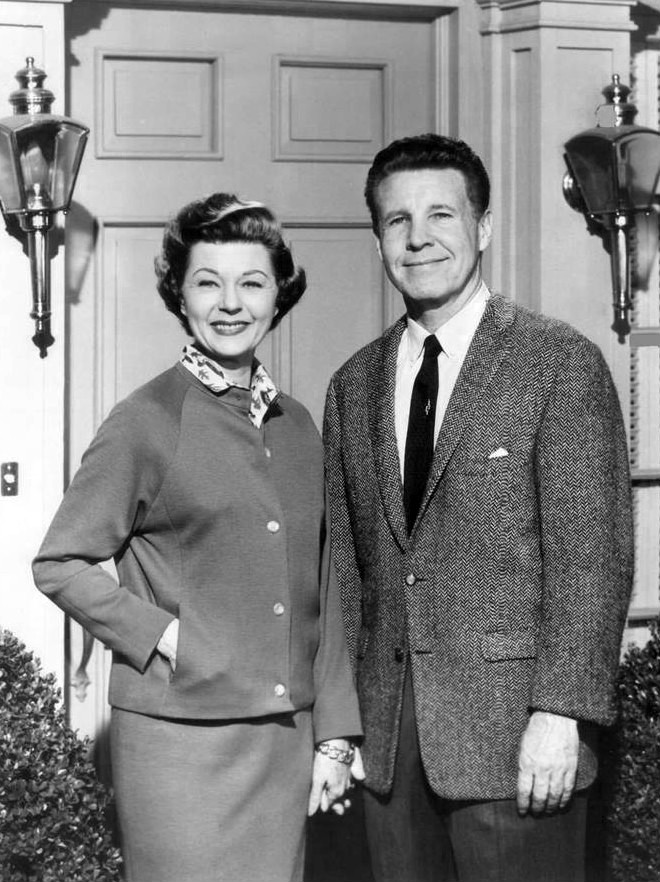 Ozzie and Harriet Nelson were, for all the known standards of that time, the best example of the perfect American family, portrayed in the popular sitcom “The Adventures of Ozzie and Harriet.”

The Ozzie and Harriet Show

The scripted show, which started in radio in 1944, followed the life of bandleader Ozzie and his wife/vocalist Harriet. Their sons, David and Ricky, were too young to take part in the show for its first four seasons, so two actors were hired to replace them. Then, in 1949, the boys aged 12 and eight respectively made their first appearance on radio broadcasting, finally making it a real family affair. 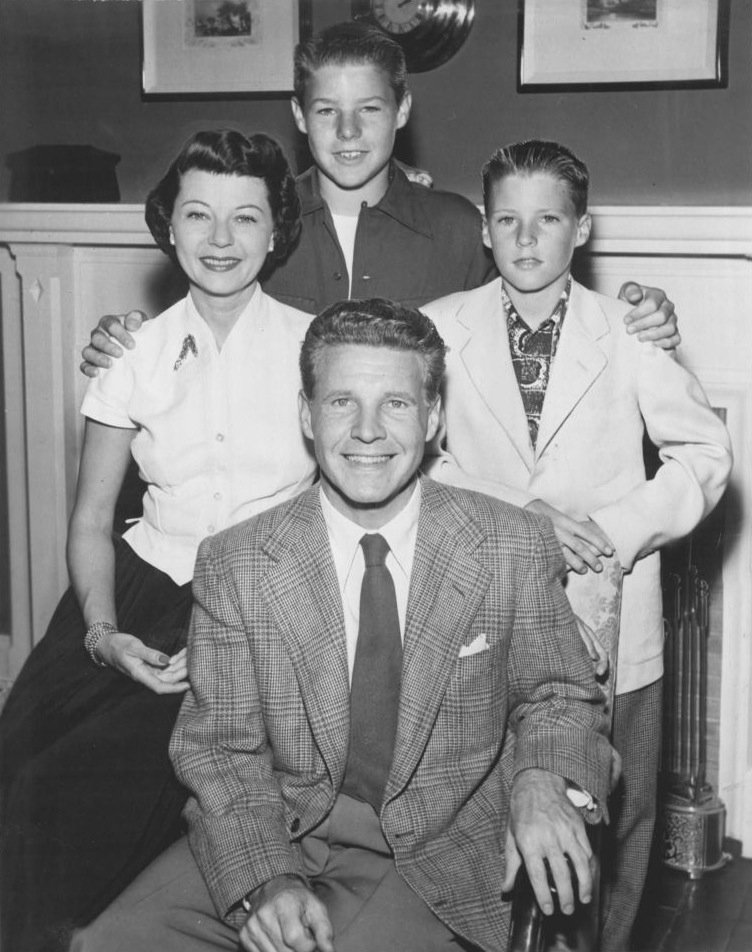 “The Adventures of Ozzie and Harriet” made its debut on television three years later, premiering on ABC on October 1952. The series ran for 14 years in which fans got to see David and Ricky grow up through their screens, and even after the end of the show, the boys would keep making headlines.

Ricky Nelson was often given the fun lines of the show, and as a result, he received more attention from fans.It also helped that the grew up to become a handsome and charming young man with a talent for music, and when he decided to launch a career as a singer, he quickly became a heartthrob. 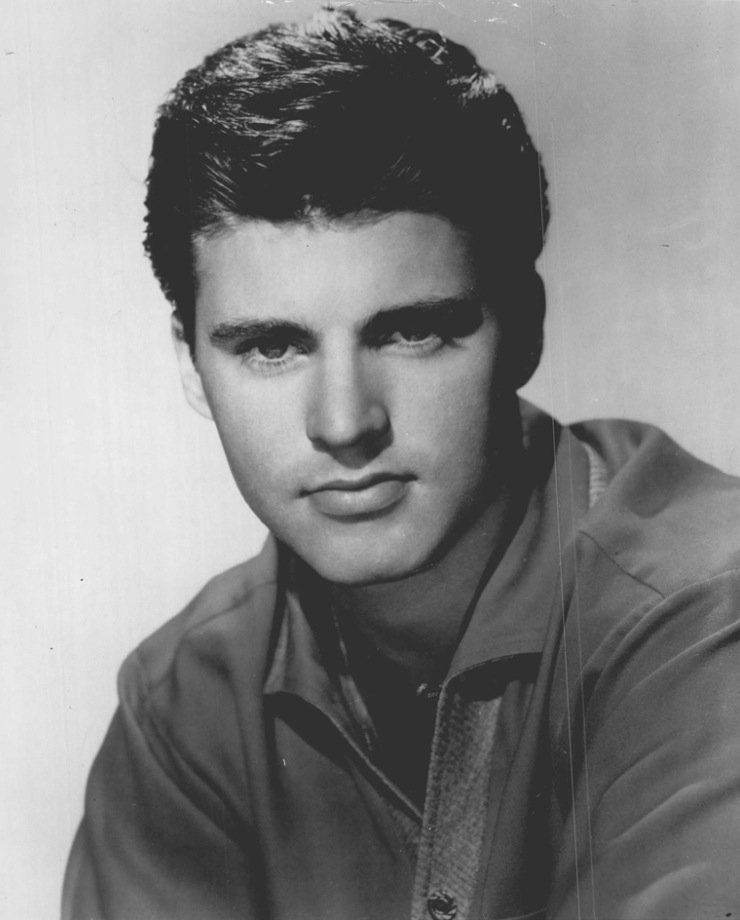 Ricky’s double-hit debut single “I’m Walkin’” and “A Teenager’s Romance” reached #4 and #2 on Billboard's Best Sellers in Stores chart. He placed 53 songs on the Billboard Hot 100 and the list’s predecessors between 1957 and 1973. On 'The Adventures of Ozzie and Harriet' they used to let Ricky perform to a selection of his peers. This helped Ricky launch his career. Soon Ricky had reached a point where he was famous in his own right and not just because of the show.

Nelson was in the middle of his success when he started dating Sharon Kristin "Kris" Harmon in 1961. She was the daughter of football player Tom Harmon and actress Elyse Knox. Harmon shared the Hollywood upbringing with Nelson, and their parents were more than happy with their union. 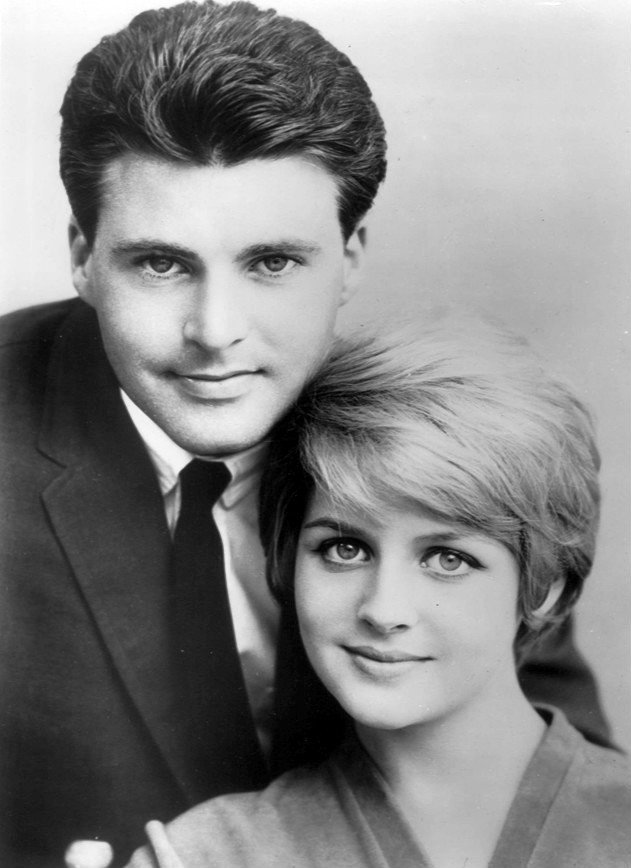 They married on April 20, 1963, and Kris joined the TV show as “fictional” Ricky’s wife. Confusing even more the viewers who were already wondering were the line between fantasy and reality was with the Nelsons. The couple had four children: actress Tracy Kristine Nelson, twin sons Gunnar Eric Nelson and Matthew Gray Nelson who formed the band Nelson, and Sam Hilliard Nelson. Sadly, Ricky and Kristin’s marriage was going downhill. She told PEOPLE in 1987 that they had become “hippie rock ‘n’ rollers,” doing what everyone else was doing those days—meaning, mostly drugs. 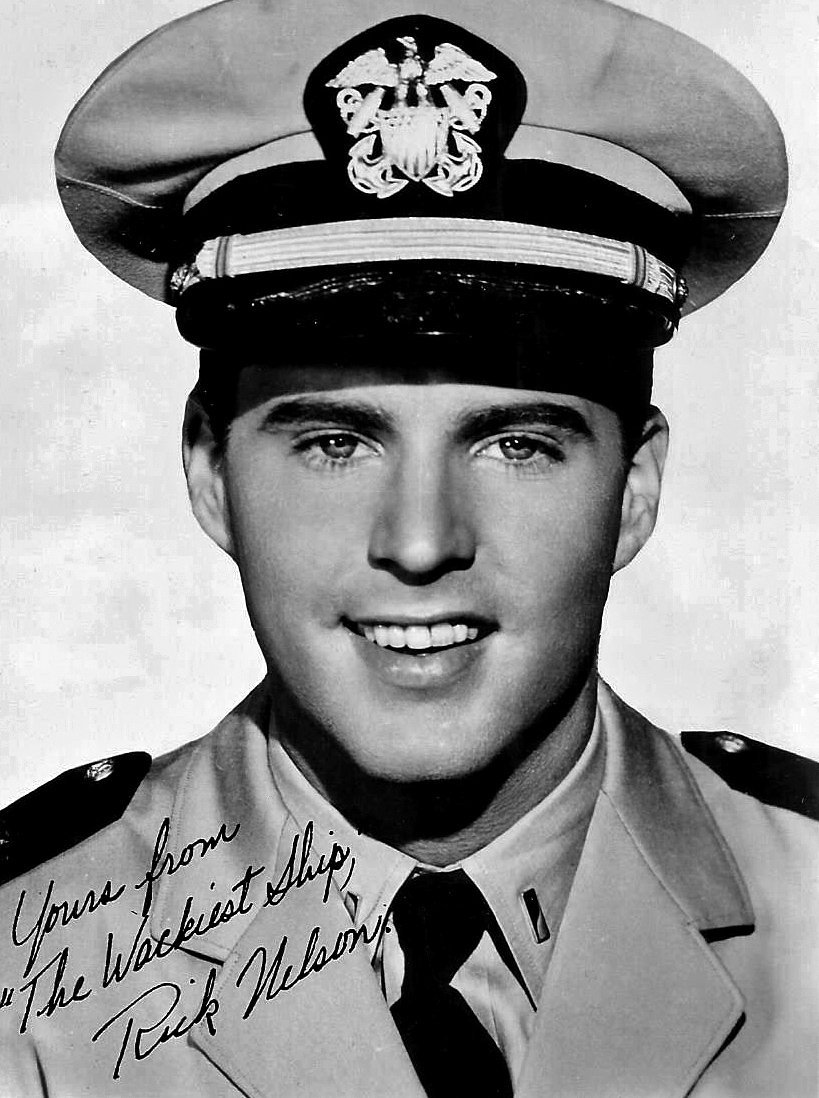 “At first we were in it together. I tried to be one of the guys, to fix the marriage by going on the road and being involved in road stuff that is not good for anyone. After a while, we were totally messed up, both of us,” she confessed. Kristin got into therapy and managed to convince Ricky to join her, but he stopped showing up after a while.

“I tried telling my family, there’s a drug problem here and we’ve all got to help. But they denied there was anything wrong,” she added. Eventually, Kristin filed for divorce in 1977, and it would become a messy legal battle for spousal support, custody, and legal fees that finally came to an end in 1982. 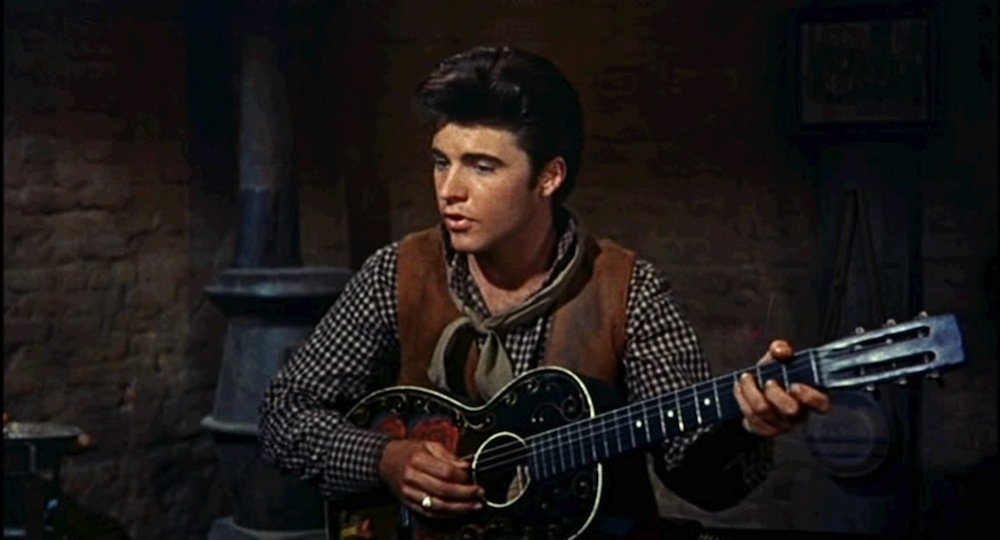 Kristin kept fighting her drug addiction and left her youngest kid under the care of her parents. Ricky continued touring around the country, this time in the company of his new fiancé, Helen Blair. After Christmas of 1985, Ricky, Helen, and the members of his band left for a three-stop tour of the southern United States. Their last show was scheduled for New Year’s Eve in Dallas, Texas, but they didn’t make it. 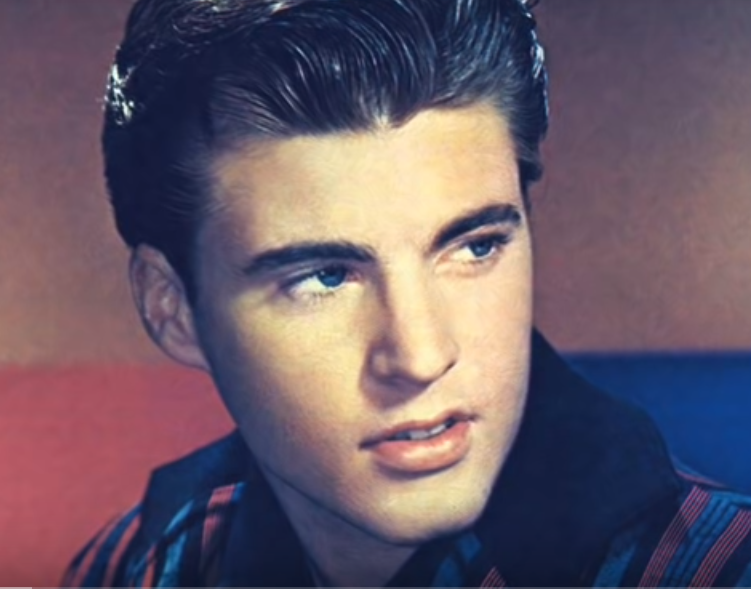 Their private plane crash-landed into a cow pasture in De Kalb, Texas. Seven of the nine occupants were killed, including Ricky, only the two pilots were able to exit the aircraft before it was swallowed in flames. Ricky was 45-years-old at the time of his passing. Nelson was posthumously inducted into the Rock and Roll Hall of Fame in 1987. 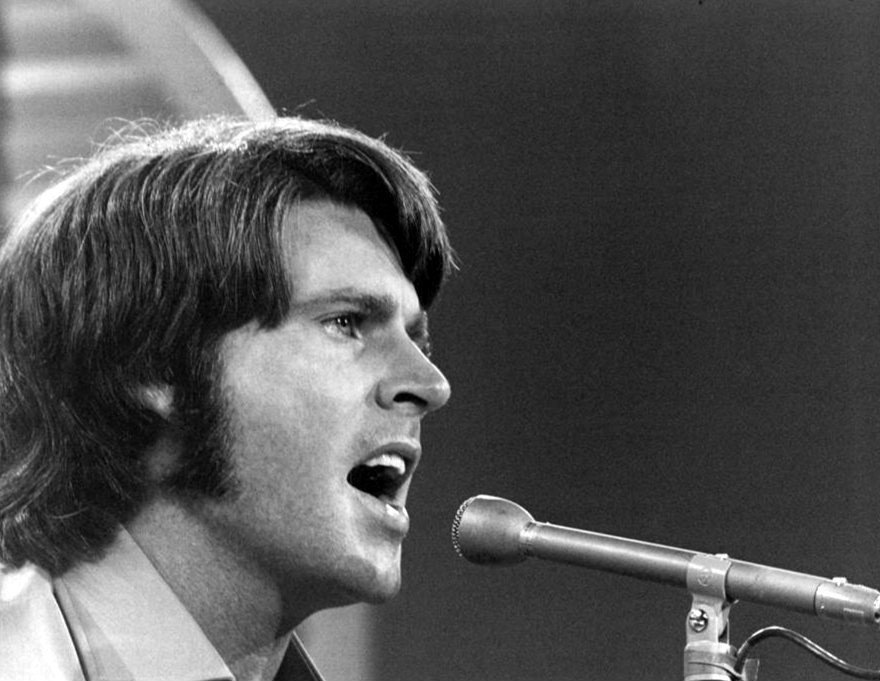 David Nelson was the last survivor of the original Nelson family. He survived his father Ozzie, who died from liver cancer in 1975; his mother Harriet, who died of congestive heart failure in 1994, and his youngest brother Ricky. David graduated from Hollywood High School in 1954, enrolled at the University of South Carolina, and joined a fraternity. But while his TV character went into law, real-life David pursued a career as an actor, director, and producer. 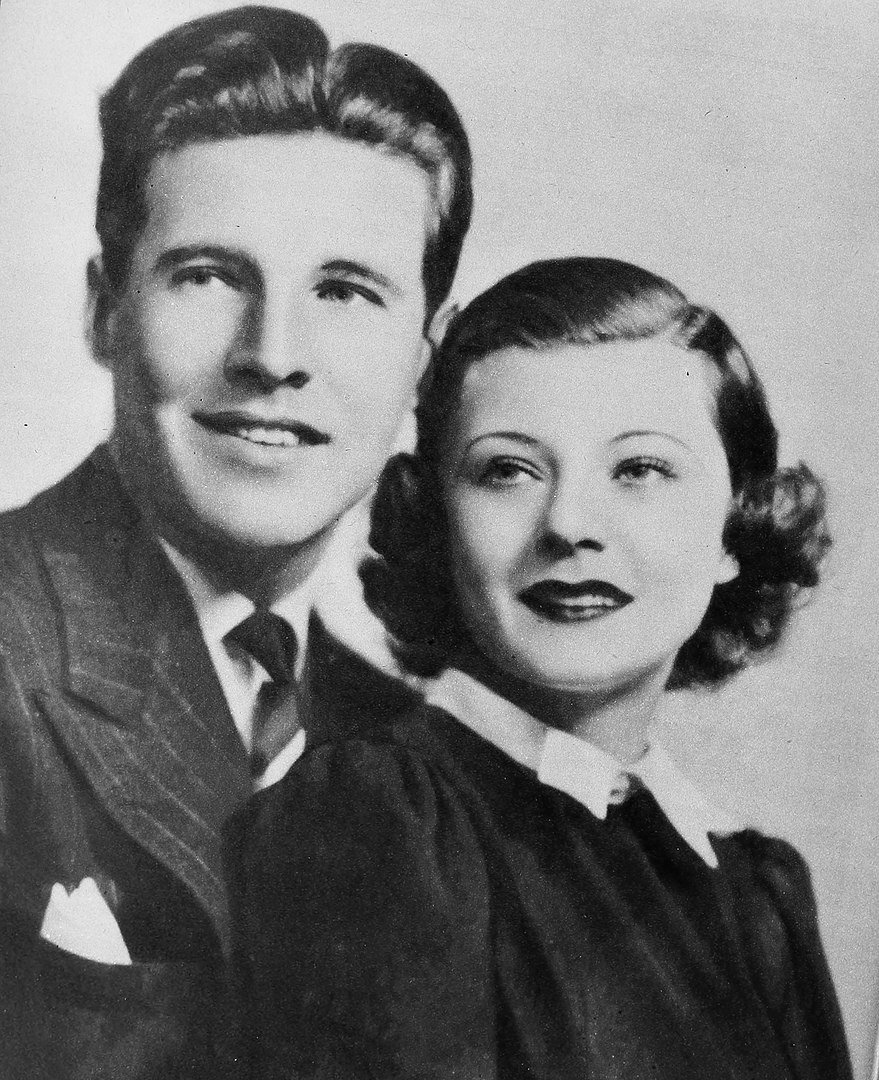 He made his debut as director by taking the reigns from his father in a dozen of episodes of “The Adventures of Ozzie and Harriet” in the ‘60s. He also directed commercials and some chapters in other TV shows. David had acting roles in films such as “Peyton Place,” “The Remarkable Mr. Pennypacker,” “The Big Circus,” “Day of the Outlaw,” “30" and “The Big Show.” 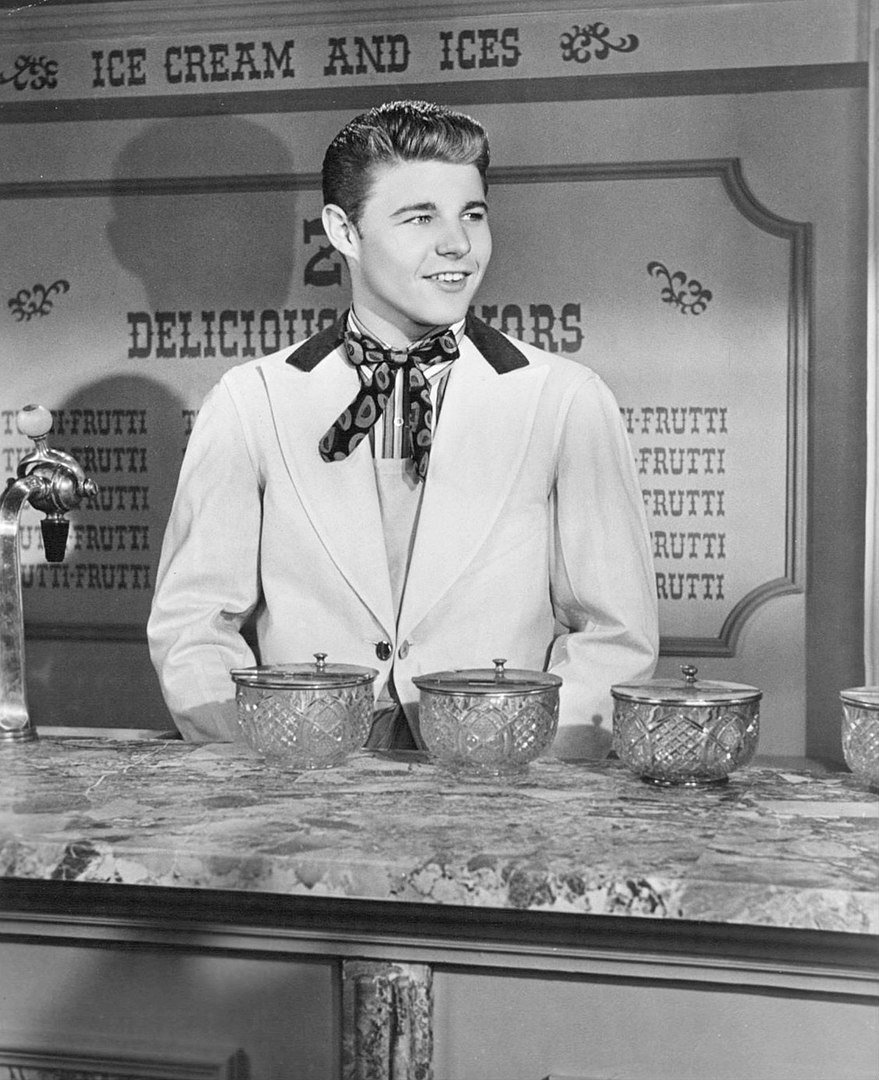 David Nelson in a scene from the television program Ozzie and Harriet. | Photo: Wikimedia Commons Images 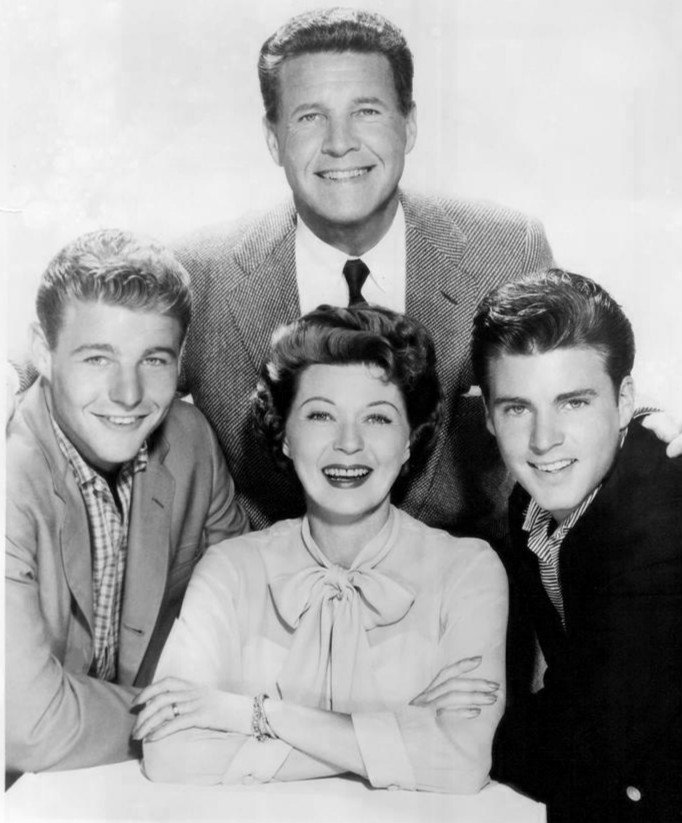 “We would keep up the front of this total problem less, happy-go-lucky group,” he said.

“There might have been a tremendous battle in our home, but if someone from outside came in, it would be as if the director yelled, ‘Roll ’em.’ We’d fall right into our stage roles.” “It’s an awfully big load to carry, to be everyone’s fantasy family,” he added. “How long can you keep protecting that image and never let any of the outside world in?” 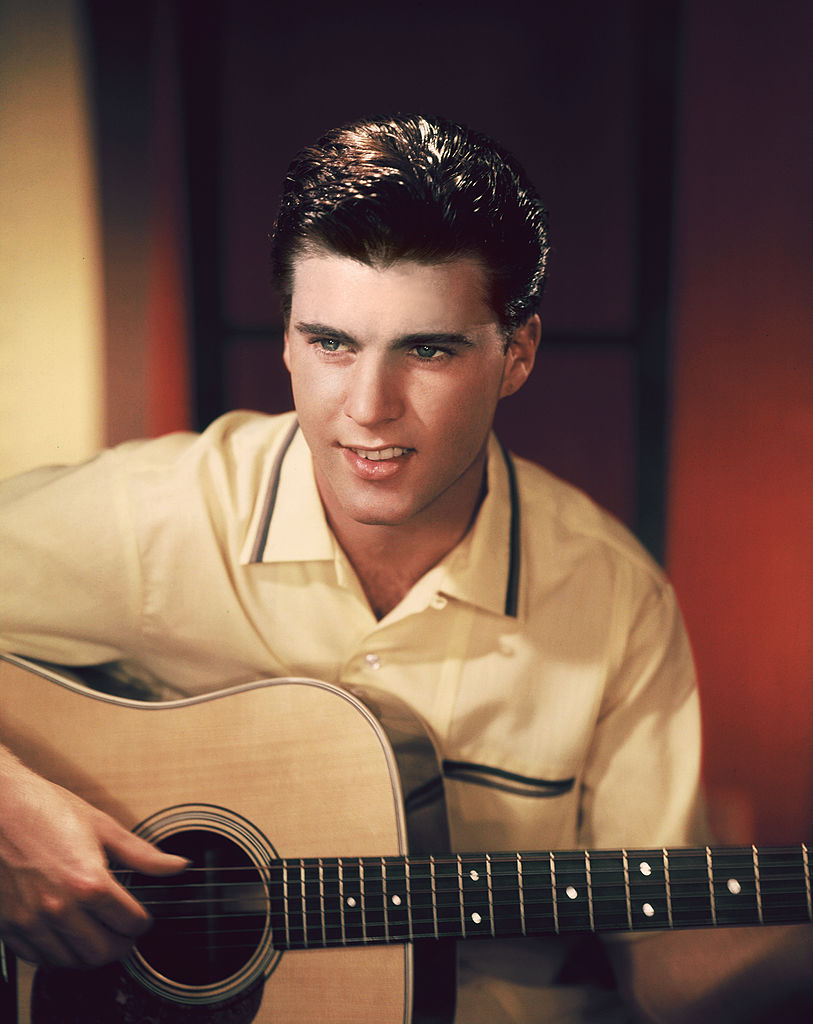 One could say in our current world of reality shows that there are many families suffering from the same affliction. Perhaps you could consider 'The Adventures of Ozzie and Harriet' as the original Kardashians.

In 1987, David became the host and narrator of "Rick Nelson: A Brother Remembers," an hour-long documentary where grief-stricken David celebrated the life of his brother. "I guess I was the right man for the job," David said at the time. "I was the only listener in the family. Mom and Dad and Rick were the musicians." Always the thoughtful sibling, David didn't include all the slandering stories about his brother on the documentary. Although never getting far in his acting career David did have talent. He produced, directed and hosted the documentary about his brother.

"Emotionally, it was very difficult for me to focus in on Rick. But if I was still hurting, the investigation into the hurt helped put it all into perspective," he said. "As executor of my brother's estate, I've been close to everything that has happened since." 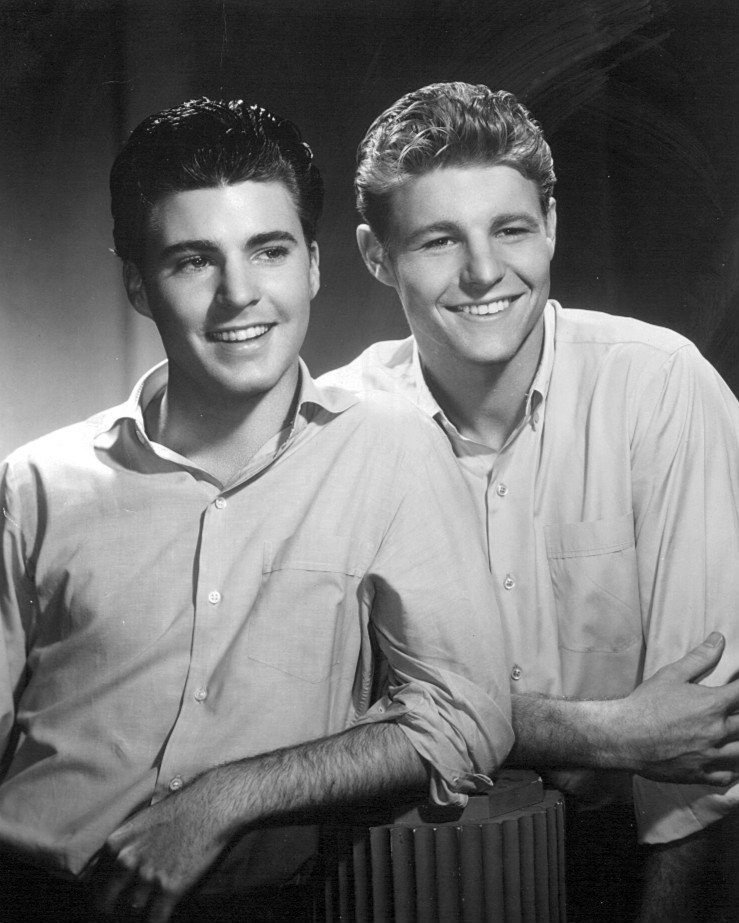 "I determined quickly not to fight the innuendo and slanderous stories in the media. I wanted the show to make a positive statement about Ricky. I don't think he got all the credit he deserved during his lifetime." 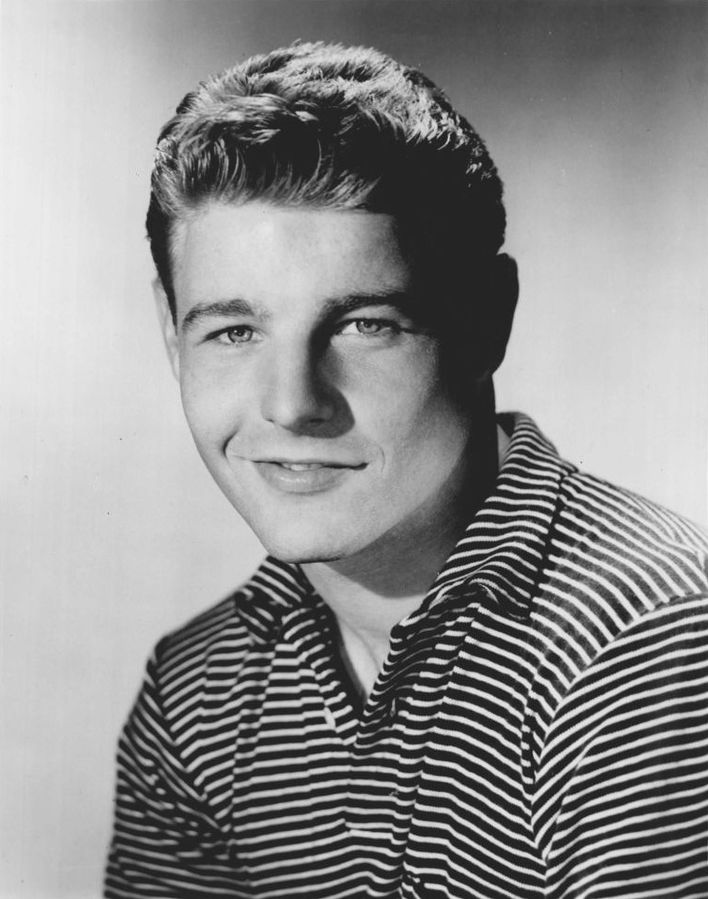 When asked whether he experienced any jealousy over his brother’s success. David denied the accusation, the actor did recount one revealing anecdote that might have brought on a certain degree of resentment. While the Nelsons were singing “Happy Birthday to You” on David’s 21st birthday in 1957, Imperial Records mogul Lew Chudd burst in unannounced to bestow Rick with a gold record for “Be-Bop Baby.” David sardonically told, “At least Chudd could have waited until I blew out the candles.” 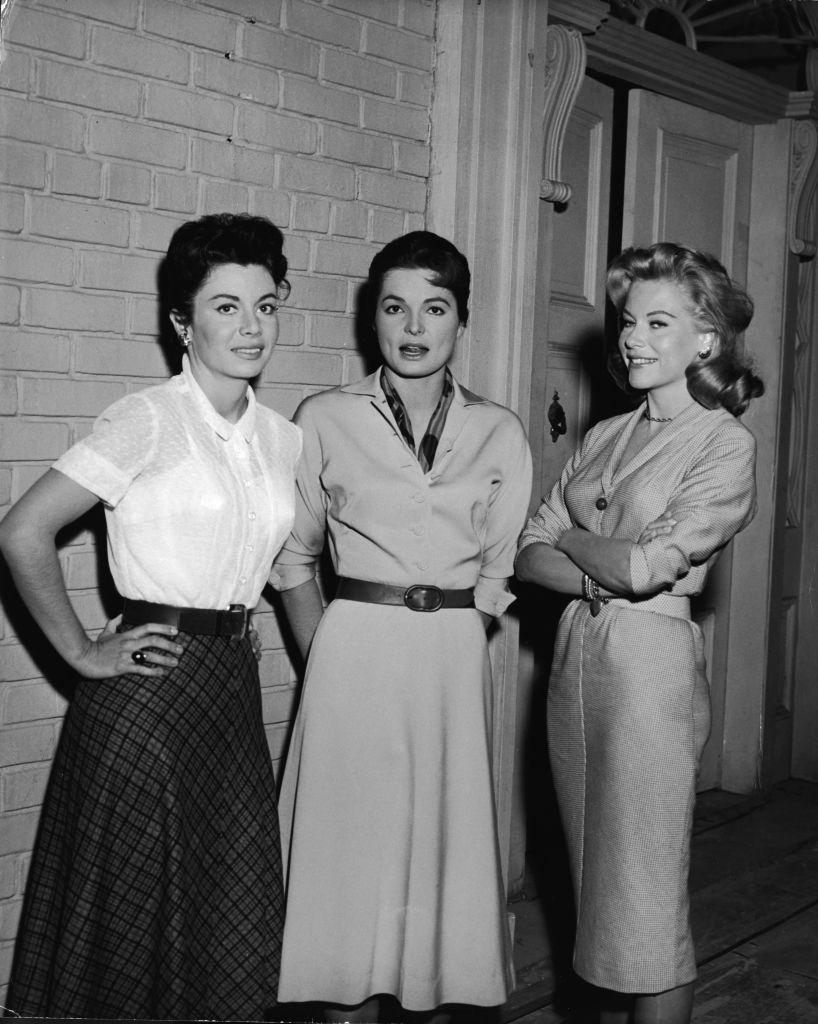 Nelson married June Blair in 1961, and they had two sons: Daniel Blair and James Eric. However, their relationship didn't work out, and they were divorced in 1975. He married Yvonne O’Connor Houston the same year of his first divorce and adopted her three children: John, Eric, and Teri. The couple was together for 36 years until David’s passing in 2011, and they had seven grandchildren.

Nelson died from complications with colon cancer at his Century City home on January 11, 2011. He was 74. He was cremated. His parents and brother who rest at the family plot in Forest Lawn Memorial Park, David rests in Westwood Memorial Park's outdoor Garden of Serenity columbarium. 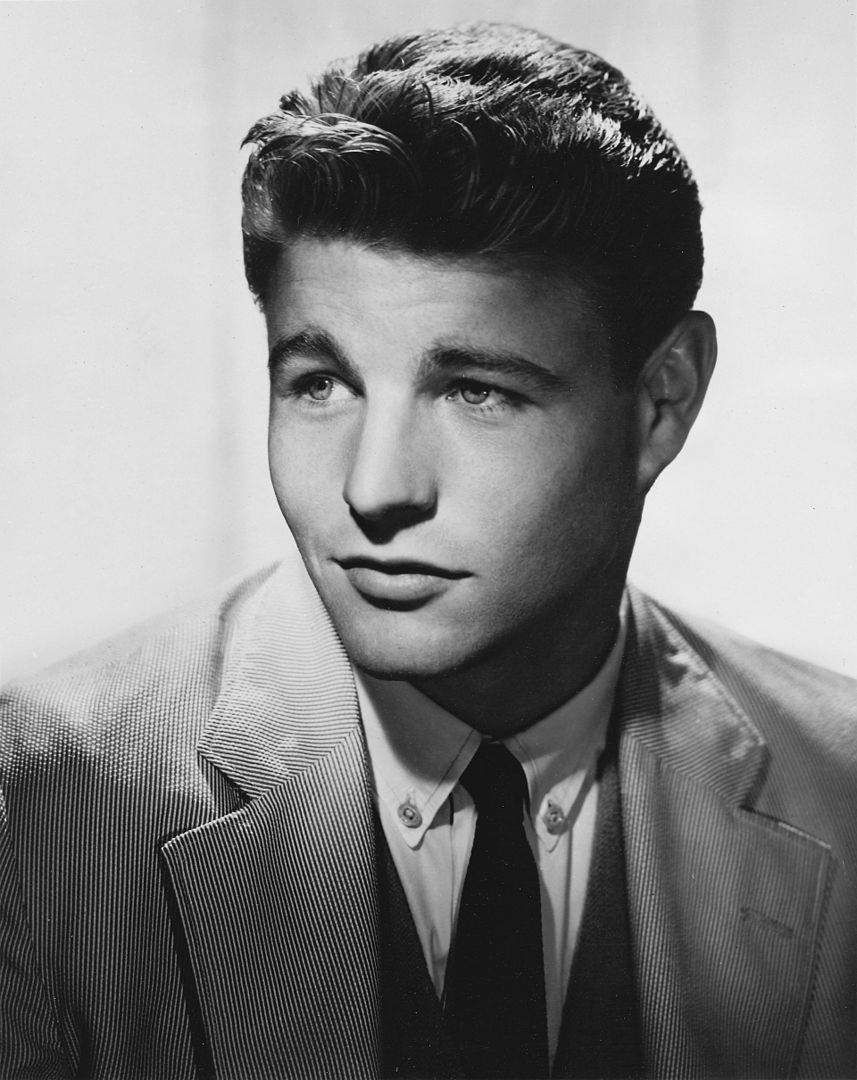 With reality shows like the Kardashians, we see a continuation of the trend of the Ozzie and Harriet show. Whether scripted or not these shows often end up blurring fans reality. What do you think are the Kardashian's modern-day Nelson's? Is it real or fiction? Let us know in the comments.