Fan Theories About 90's Cartoons That Changed Our Childhood

Fan theories can get a bit absurd, some bordering on crackpot, but now and again you come across one that makes so much sense it just has to be real. These fan theories about '90s cartoons aren't for the faint of heart and might have you second-guessing your childhood. Inbreeding, marital affairs, and dead babies are just the beginning. Have you ever heard about the Rugrats being a figment of Angelica's imagination? What about the one where all the kids in Ed, Edd n Eddy are all trapped in purgatory? Not all of these fan theories about '90s cartoons are creepy, but there are a few you might regret reading before bed. 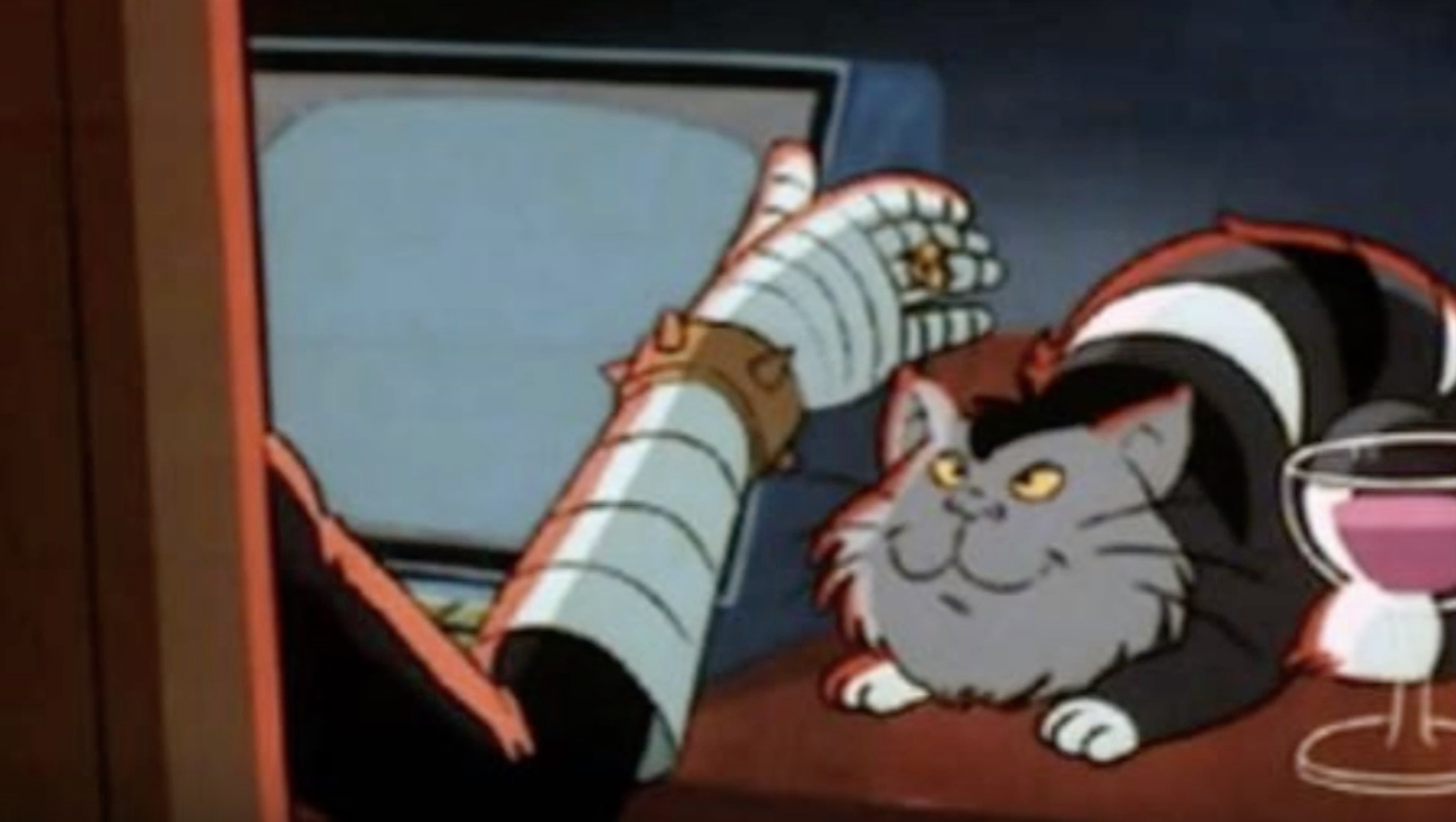 The problem is that the man they modeled the Robot-Cop (that's right) after survived. After discovering a robot replaced him, he became the evil Dr. Claw. Why do you think you never see Dr. Claw's face? It's the same face as Inspector Gadget!

2. In Pinky and the Brain, Pinky Is the Genius

The theme song for Pinky and the Brain tells us "one is a genius, the other's insane." Did you ever wonder why they don't explicitly tell us which mouse is which? One popular fan theory states that Pinky is the genius, and Brain is insane. I mean, Brain is obsessed. It makes sense - the insane megalomaniac brain is trying to take over the world every day. By playing dumb Pinky can thwart him time and time again, saving the world and leading Brain to believe it’s always an accident. 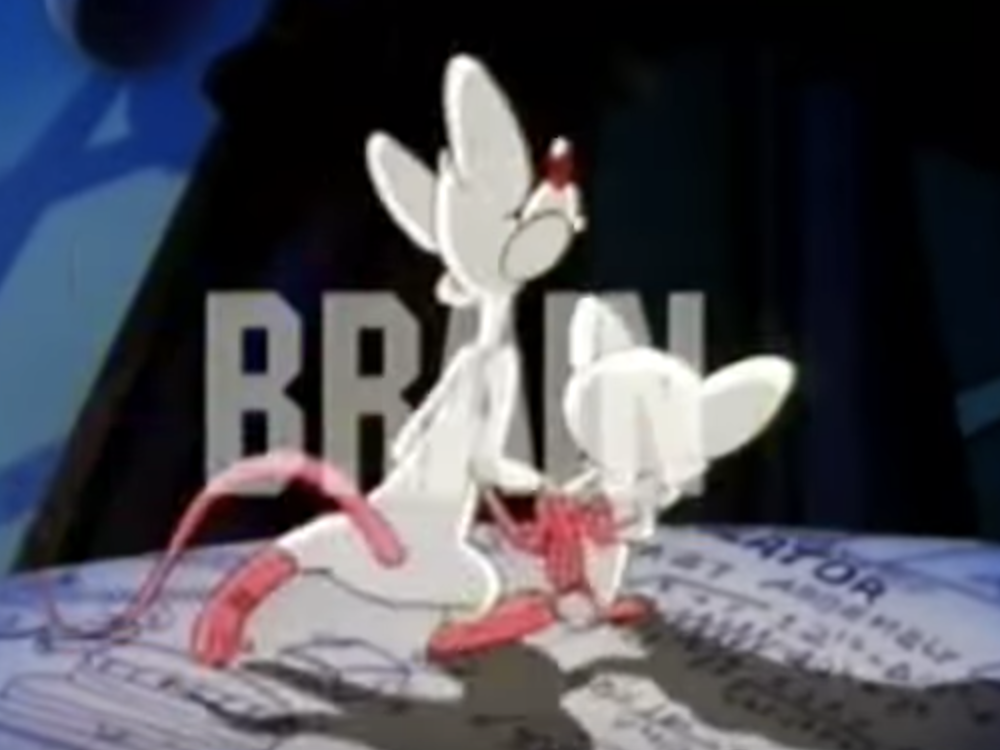 3. The Kids from The Magic School Bus Grew Up to Be the Planeteers

There's not much to this one. The kids from The Magic School Bus look exactly like Captain Planet's Planeteers. Because they're the same people. BUT - there are obvious flaws in that theory. The Magic Schoolbus kids were American schoolchildren, and the Planeteers were all from different countries. TheMary explains that though! Gaia kidnapped children and relocated them to an island. There, she brainwashed them into thinking they were in school, and she was their teacher, Miss Frizzle. In reality, this was an indoctrination camp where she created the perfect pollution fighters by instilling a love of science and ecology into them at a young age. When the children had matured, Frizzle/Gaia wiped their memories and sent them out as an eco-friendly sleeper cell until she needed them. Years later, she gave them the power rings and sent them off on a series of adventures. 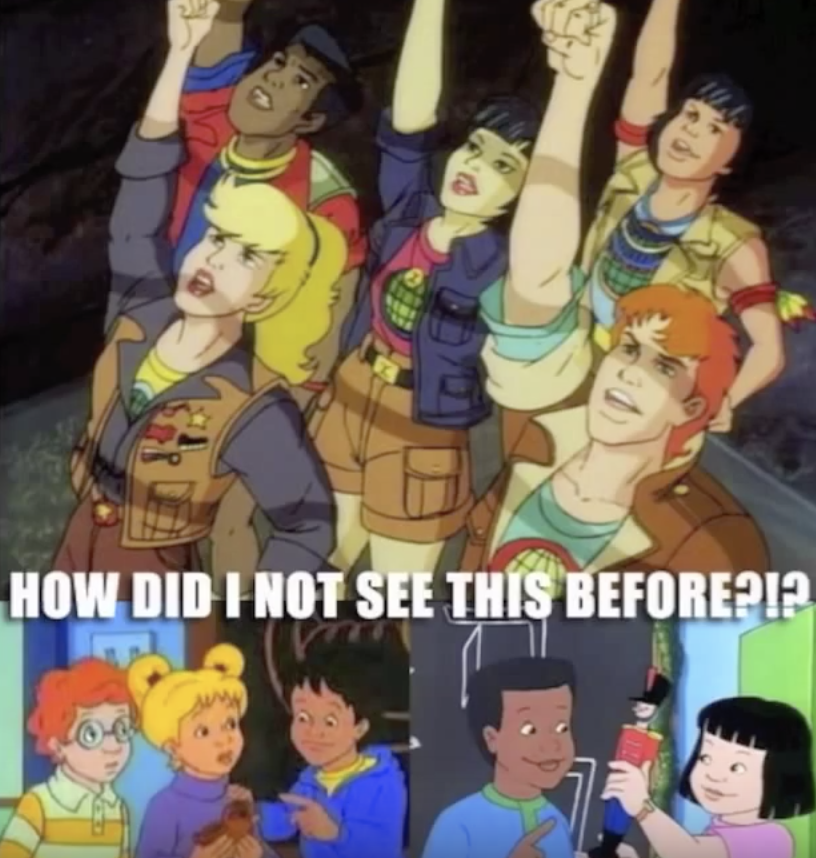 4. Bikini Bottom Is the Result of Nuclear Testing

Ever wondered about Bikini Bottom? One fan theory explains why a sponge would be talking in the first place: Bikini Bottom is named for its location at the bottom of the Bikini Atoll (an atoll in the Marshall Islands). Between 1946 and 1958, more than 20 nuclear devices were detonated in this area, including underwater.

The characters in Spongebob Squarepants aren't a bunch of goofy little creatures, but rather a bunch of mutated freaks. Is this happening in The Great Plains of The Handmade’s Tale? 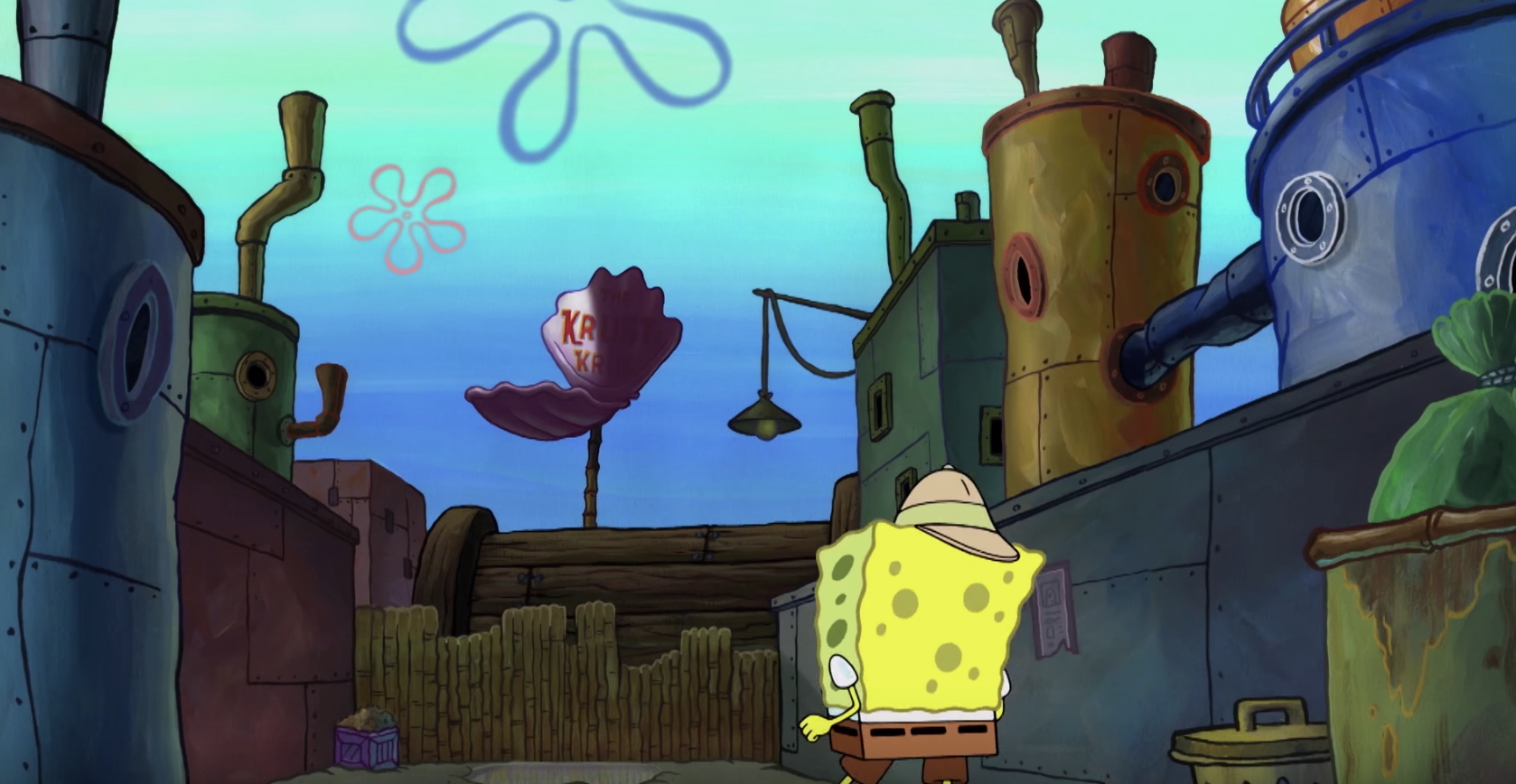 If you're a big fan of King of the Hill, you know that Hank and his son Bobby are complete opposites. While Hank is a sports nut who loves fixing cars and doing yard work, Bobby is a creative slacker who loves theater, gardening, and playing with "dolls." Bobby and Bill Dauterive are much more similar in personality than Bobby and Hank. They also look somewhat similar.

It also explains Bill’s crush on Peggy - because they had an affair years ago! While she moved on from it, he didn't. Peggy also outed Hank’s narrow urethra, which could have presented a problem in conceiving a child. 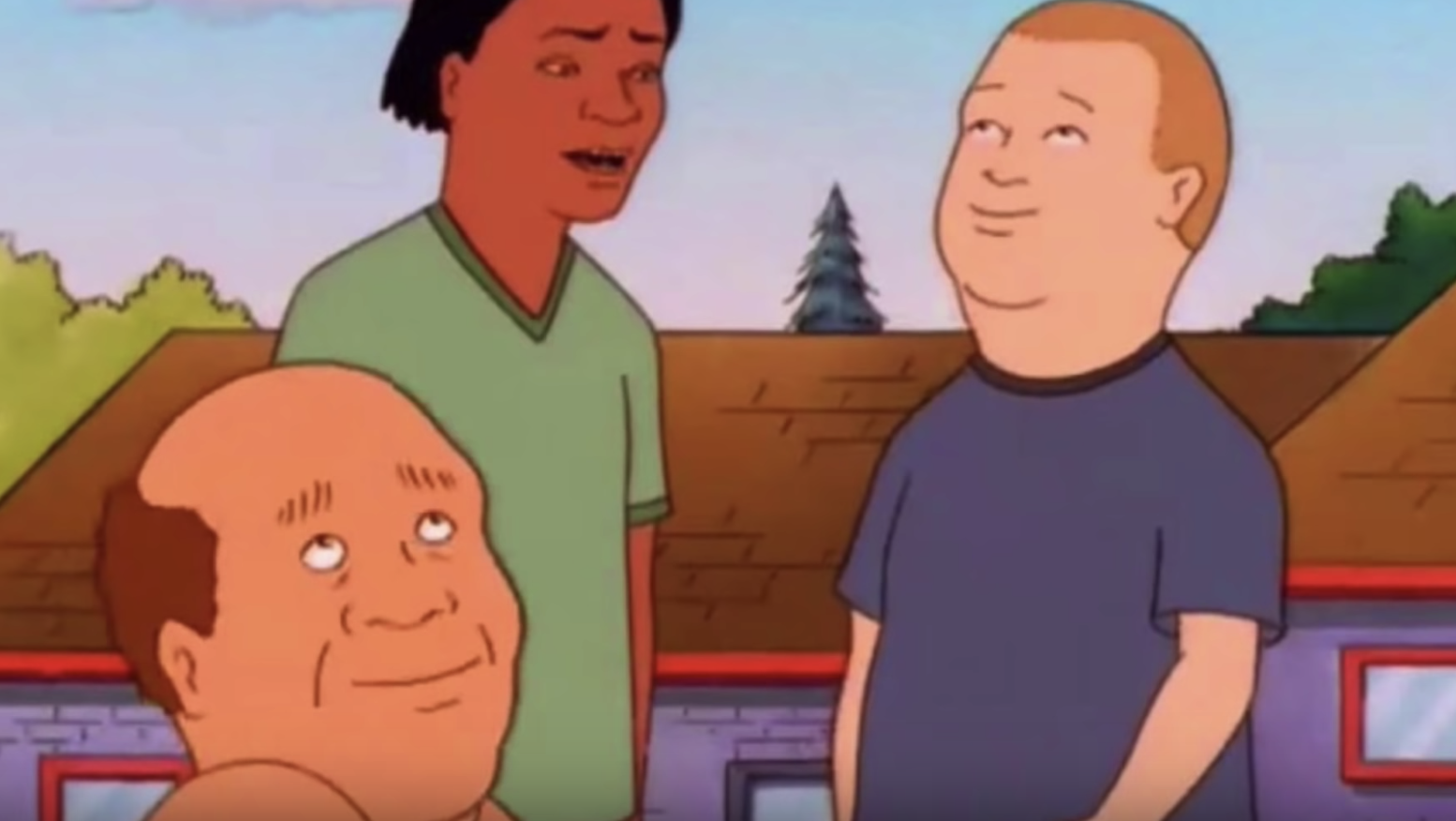 6. Caillou Is Terminally Ill with Cancer

This one is a bit tragic, but why else would a young child be completely bald? It would be a little off for Caillou's parents to shave his head, and it's practically impossible to go bald before going through puberty. Unless you have a serious ailment like alopecia areata. Also, Caillou's sister Rosie has red hair, despite both parents being brunettes.

The explanation here is that she was adopted, as Caillou's parents knew they were both high-risk for cancer and didn't want another child to go through what Caillou did. Wow. Bet you didn’t see that coming. 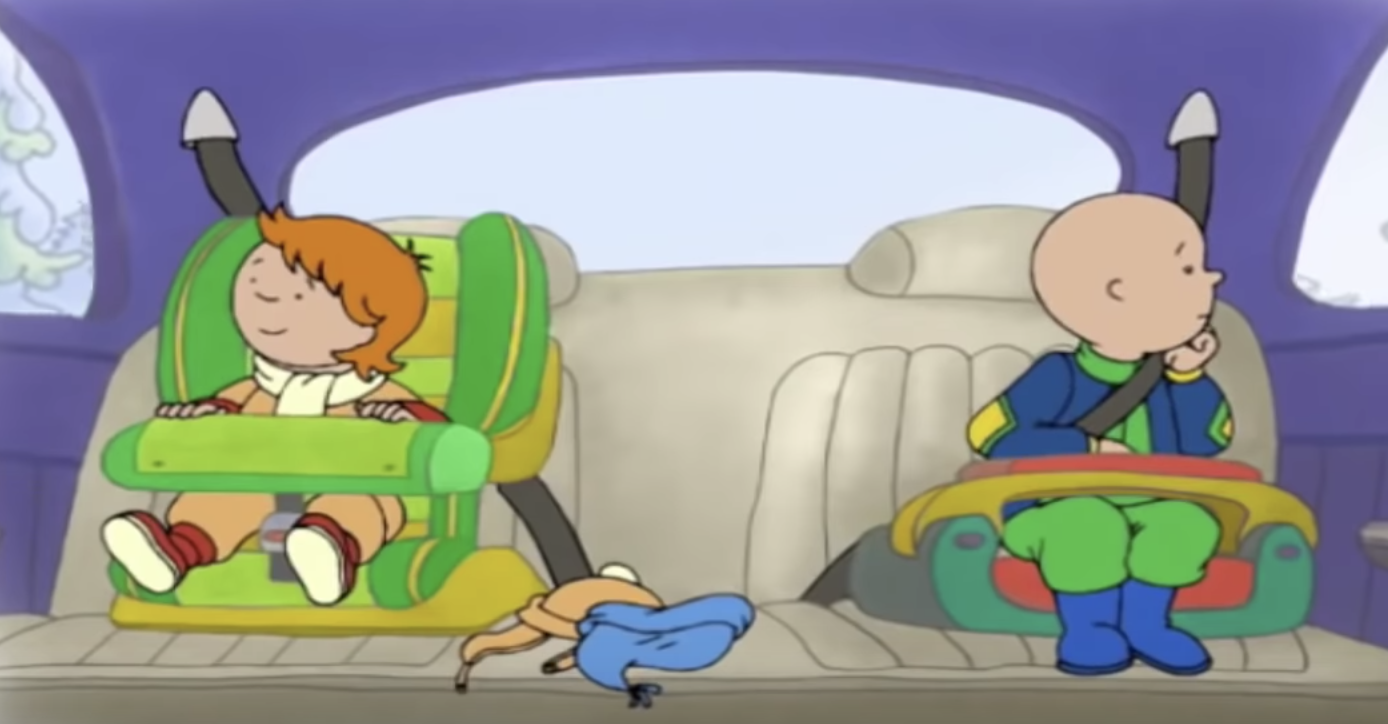 7. The Children in Ed, Edd n Eddy Are in Purgatory

According to a popular fan theory, the children in Ed, Edd n Eddy are all dead and trapped in purgatory. It explains why there are no adults in the show, why the entire series seems to take place on their little cul-de-sac, and why the children have blue-tinted tongues. In case you didn’t know, lack of oxygen can turn your tongue bluish-black. Also death.

The children from the show all come from different time periods - Johnny died in the early 1900s, which is why he has a plank board as a toy. Eddy was a fast-talking swindler from the Great Depression era, and Double D died in the ‘80s, hence his love for technology. We’re on a dark roll! 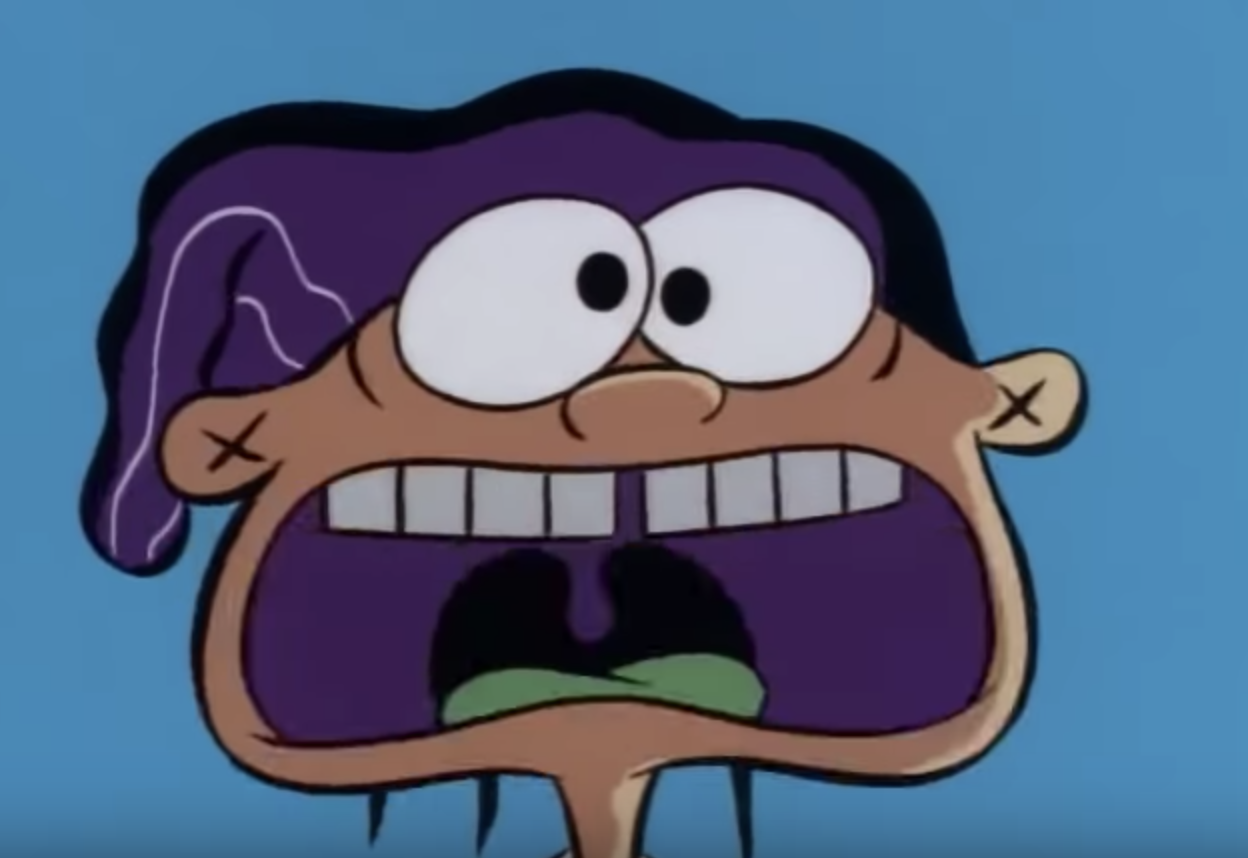 8. The Babies in Rugrats Are Figments of Angelica's Imagination

We all loved Tommy, Chucky, Phil, and Lil in Rugrats, but what if we told you that none of the babies existed? That's what one popular fan theory claims - the babies are merely a figment of Angelica's imagination. Chuckie died with his mother as an infant, which explains why his father Chaz is spastic and nervous all the time. Wait - what?

Tommy was stillborn, causing Stew to go mad and spend all his time in the basement building toys for the son he never had. This list got real dark real quick. Finally, the Deville family ended up getting an abortion, and since Angelica didn't know the sex of the baby, her mind created the twins. 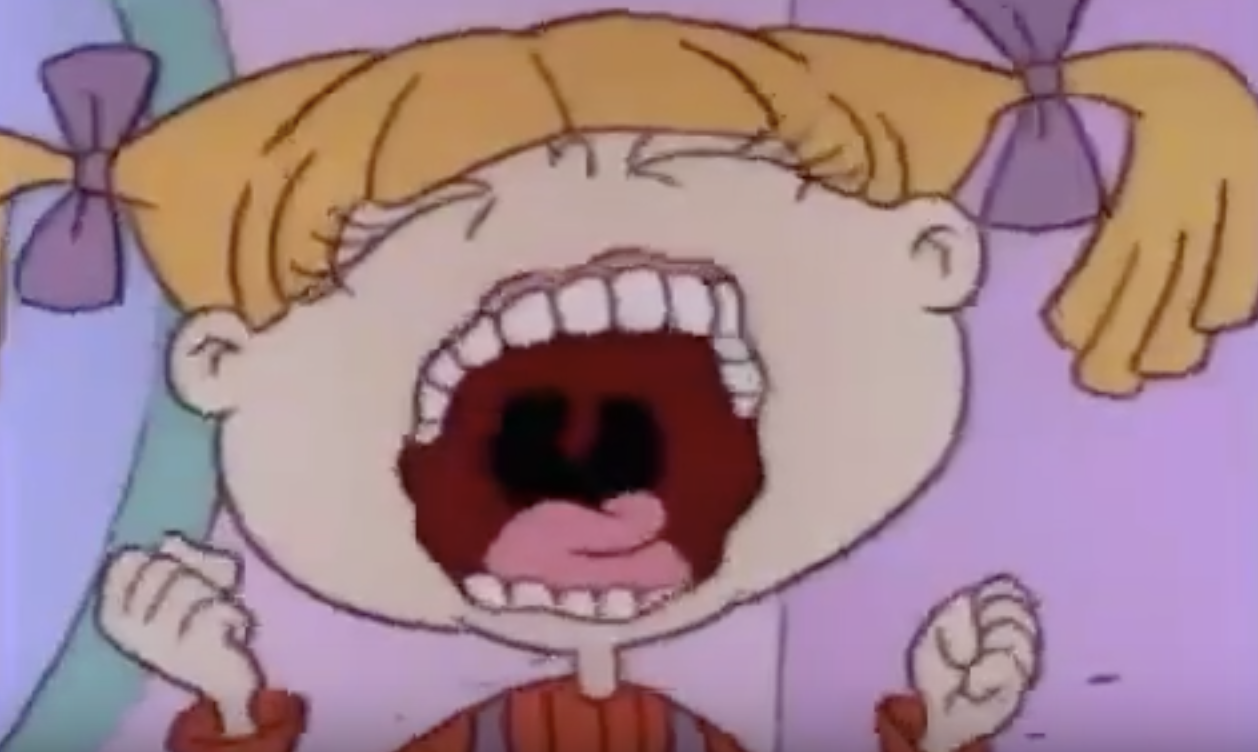 9. Helga Is the Main Character in Hey Arnold!

Hey Arnold! was one of Nickelodeon's most popular cartoons in the '90s, but who is the main character? The obvious answer is Arnold, but if you dig a little deeper, you can make a case that Helga Pataki is indeed the show's star. 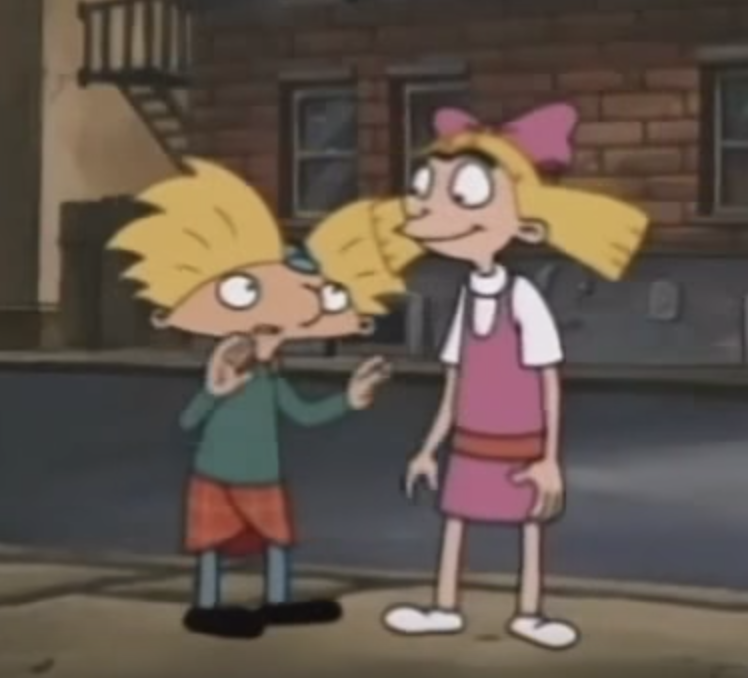 Have you ever noticed how Professor Utonium from The Powerpuff Girls and Jack from Samurai Jack look exactly the same? One fan theory states that after his final showdown with Aku, Jack and Aku are launched into a time portal that the evil Aku created. As a result of using his dark power, Aku transformed into a liquid version of himself.

Now in a new world and time-period, Jack dedicates his life to studying the liquified Aku, or "chemical X.” Eventually, he spawns the Powerpuff Girls from the evil chemical. Doesn’t that mean the Girls are evil? 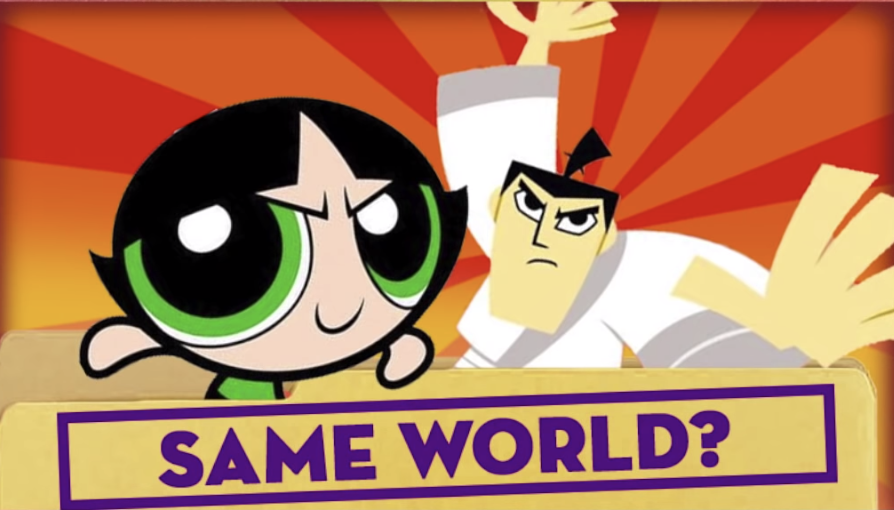 11. All The Strange Events in Courage the Cowardly Dog Are Normal

Courage the Cowardly Dog first aired on Cartoon Network in 1999. The concept of the show was simple - the dog lives on a farm with his owners Muriel and Eustace. In every episode, a scary creature, person, or monster would visit the farm and terrorize the family. Courage would eventually confront his fears and foil the monster's plans, thus saving the family.

One fan theory, however, presents an opposing viewpoint: what if the "monsters" that visit the family each week are merely regular people seen through the eyes of a dog? In other words, the show is not about literal monsters who haunt the family, but the overactive imagination of a dog and how it perceives the world around it!

12. Chief Wiggum and His Wife Are Brother and Sister

This one is weird but explains why The Simpson's Ralph Wiggum is such a dope. Clancy Wiggum and his wife Sarah look pretty similar. Almost like twins. He claims to have a sister who is completely hairless like a Sphynx cat. He has a strained friendship with Mayor Quimby. This strained relationship may explain why Wiggum has kept his job, despite his inability to do any of his duties. He also claims he met his wife when he arrested her for drug possession. However, he planted the drugs on her. Which proves he can manipulate and blackmail people.

Gross, right? If they ARE brother and sister, then Ralph is a result of inbreeding, hence his extremely low IQ. 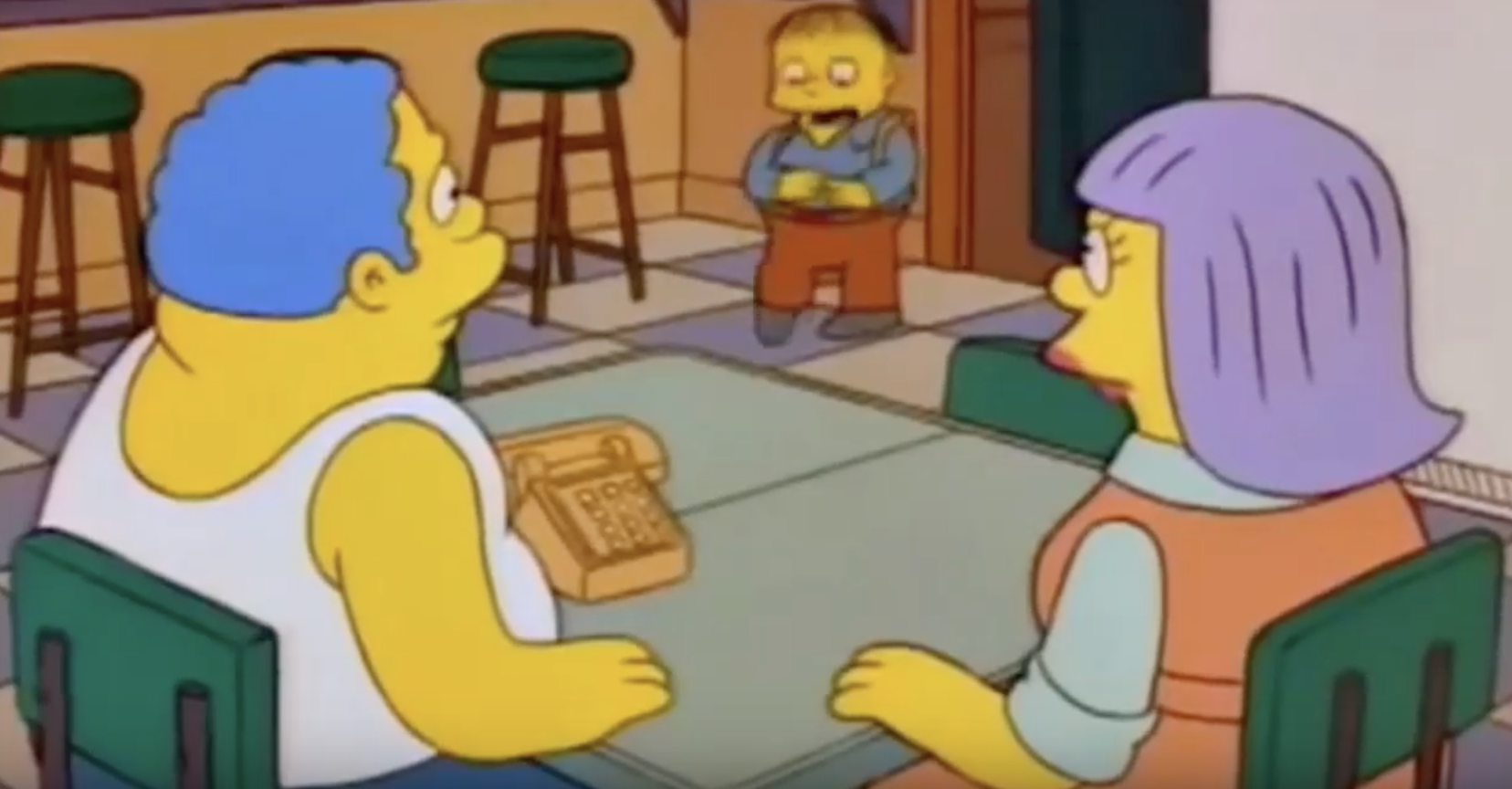 Ash Ketchum competes in multiple Pokemon leagues. That would take years. The Pokemon trainer never seems to age past the age of 10 years old. How is this different than every other cartoon that has ever existed?

In episode one of the Pokemon anime, Ash encounters Ho-oh, a Pokemon whose Pokedex entry states it can grant eternal happiness to whoever sees it. Since Ash's eternal happiness is to stay young forever and capture Pokemon, he doesn't age. 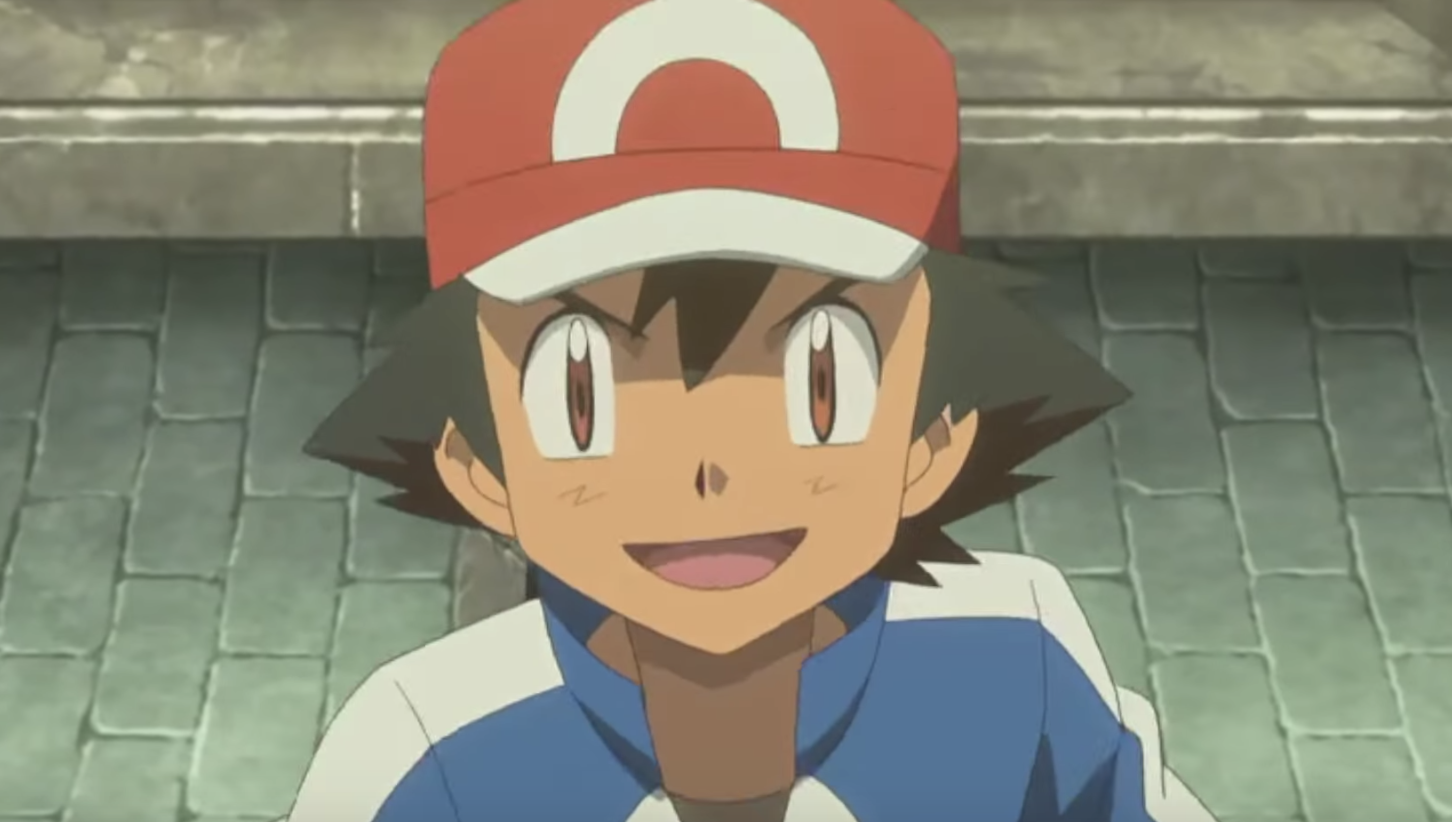 Those were the top 13 (yup, freaky 13) 90's cartoon fan theories. We hope your childhood isn't ruined! Anyone else out there afraid to go to sleep tonight?